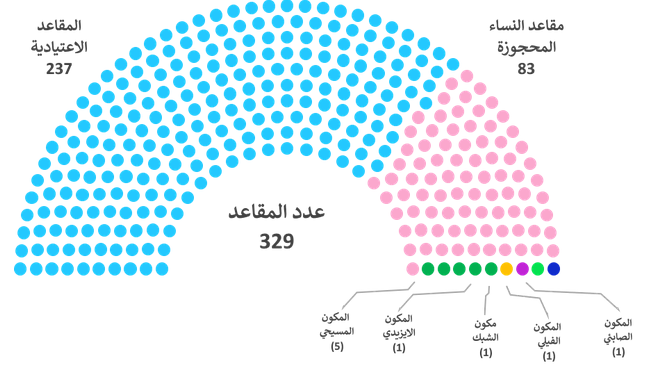 Shafaq News/ The manual counting of 8547 electoral stations indicated changes in the number of seats of the blocs in the Iraqi elections.

According to the new results, the Sadrist bloc lost a parliamentary seat, the Alliance of Progress (Takadum) four seats, and the State of Law two seats, while the Al-Fateh Alliance won three new seats, and the Kurdistan Democratic Party two seats.

The founder of the Digital Rights Network and a specialist in electoral analysis, "Hamzoz," told Shafaq News Agency that these changes are "based on an analysis of the preliminary numbers received from the (High Electoral) Commission, which represent 94% of the total ballots. There may be other changes because they are preliminary results and could be subjected to appeals and complaints."

He added, "6% of the ballots still need to be counted, but I don't think this will affect the scene significantly (change rate of 3-4 seats)."

The expected seats are distributed as follows:

For his part, the Director of IHEC's Media and Mass Communication Department, Hassan Salman, told Shafaq News Agency that the data of 8547 electoral stations had not been announced yet.

He added, "3,681 electoral stations had problems in the transmission, and they were will be transferred to Baghdad at Jundi al-Majhool Center in the Green Zone, and the ballots of these stations will be recounted manually."

Salman pointed out that "the total number of stations is 12,228, which will be recounted manually.

The results of the primary elections witnessed objections from several blocs, led by the Al-Fateh Alliance, which represents the Popular Mobilization Forces, by registering a significant decline in the new parliament, according to the preliminary results.

The final election results will be announced by the end of the current week, IHEC says