Shafaq News / One member of the Popular Mobilization Forces (PMF) was killed in an ISIS attack in Kirkuk governorate.

A source told Shafaq News Agency, "A group of ISIS militants attacked the Iraqi security forces in Al-Salam near Riyadh district which resulted in one dead of the PMF forces and two injuries of the Federal Police officers.

Earlier today, ISIS militants carried out an attack on the Federal Police commandos in Kirkuk governorate. 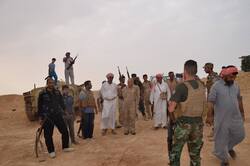