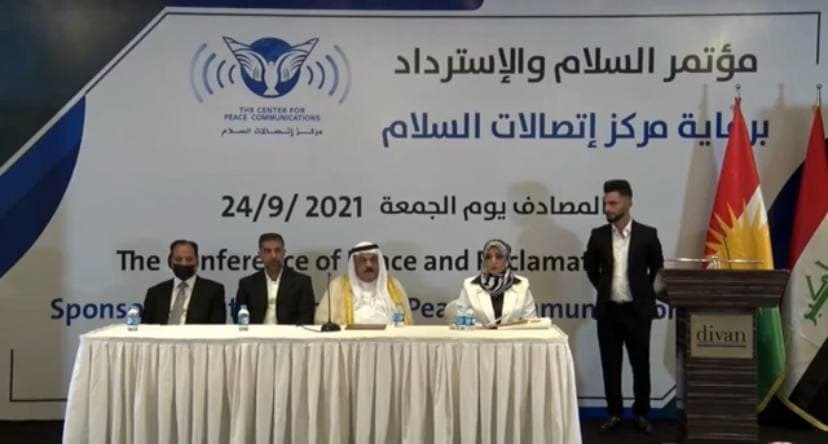 Shafaq News/ The leader of Sons of Iraq Awakening (Sahwa) Movement, Wisam al-Hardan, disowned the final communique of the "Peace and Reclamation" conference held in Erbil yesterday, Friday, claiming that he read it out without a prior acknowledgment to its content.

Al-Hardan's comments came in a statement he issued earlier on Saturday after a nationwide backlash against the normalization with Israel calls during the aforementioned conference.

On Friday, hundreds of Iraqi leaders and activists gathered in the country’s Kurdistan region to publicly call for full normalization with Israel.

The group, which includes Sunni and Shiites, youth activists and tribal leaders, said the next step after the dramatic announcement would be to seek “face-to-face talks” with Israelis.

The 312 Iraqi men and women issued their statements from a hotel in Erbil, the capital of the Kurdistan region. The conference was organized by the New York-based Center for Peace Communications, which works to advance engagement between Arabs and Israelis, and to protect activists supporting normalization.

Al-Hardan said that he was informed by the organizers that the conference was a "call for amity and tolerance among the Iraqi people after conquering the ISIS terrorism and restoring stability to the liberated cities... and ahead of upcoming elections."

"I read the communique without a prior acknowledgment to its content. I was surprised that the Zionist entity and normalization with it were mentioned. Hereby, I denounce the content of the final communique and apologize before the people of my country, my beloved governorate, and my Tribe people. I offer my apologies to the people of Palestine and the entire Arabic and Islamic world."

It is noteworthy that al-Hardan exhibited explicit "pro-normalization" tendencies in the Wall Street Journal article he wrote on September 24, at the eve of the conference.

"We demand that Iraq join the Abraham Accords internationally...We call for full diplomatic relations with Israel and a new policy of mutual development and prosperity," he wrote.

"Some of us have faced down ISIS and al-Qaeda on the battlefield," the leader of the Sawha movement wrote, "through blood and tears we have long demonstrated that we oppose all extremists, whether Sunni jihadists or Iran-backed Shi’ite militias. We have also demonstrated our patriotism: We sacrificed lives for the sake of a unified Iraq, aspiring to realize a federal system of government as stipulated in our nation’s constitution."

Calling the expulsion of Iraq’s Jews" the most infamous act" in the country’s decline, Hardan said Iraq "must reconnect with the whole of our diaspora, including these Jews."

"We reject the hypocrisy in some quarters of Iraq that speaks kindly of Iraqi Jews while denigrating their Israeli citizenship, and the Jewish state, which granted them asylum."

He wrote that while countries like Syria, Libya, Lebanon and Yemen are mired in war, the Abraham Accords represent a hopeful trend of "peace, economic development, and brotherhood."

"We have a choice: tyranny and chaos, or legality, decency, peace an,d progress," he concluded. "The answer is clear."