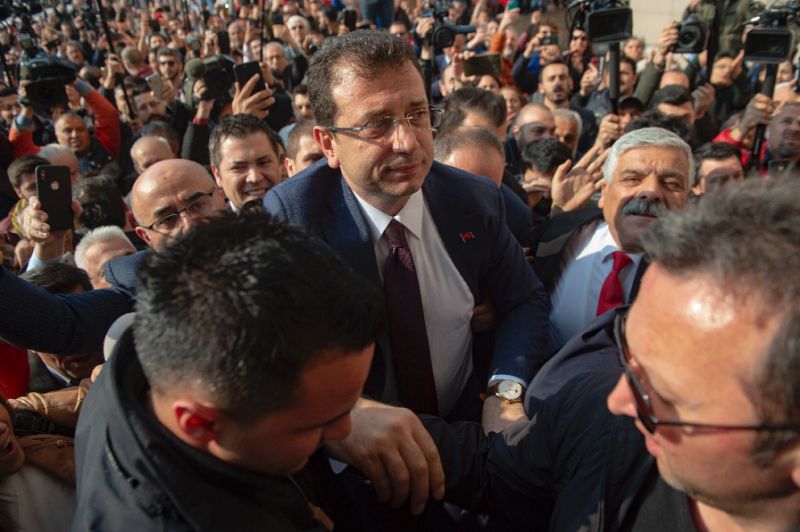 Cheering supporters packed the streets to greet Imamoglu at the Istanbul court where the party said he received his mandate certificate, but he still faces a ruling party appeal for a rerun in the city over alleged irregularities.

Erdogan's Justice and Development Party (AKP) won most votes nationwide in the March 31 election, but the loss of the capital Ankara and Istanbul to the Republican People's Party (CHP) was a major setback after a decade and a half in power.

"Ekrem Imamoglu got his mandate," CHP Istanbul MP Engin Altay told crowds from a balcony inside the courthouse. "We are all headed now to the mayor's office."

Electoral authorities had just finished a recount of some Istanbul ballots on Tuesday, but the CHP had dismissed any ruling party challenges as without merit and urged the AKP to concede.

"I am so happy", said architecture student and CHP supporter Ilayda Pembe, 25, at the courthouse. "I was beginning to think he would never get the mandate. A new day for Istanbul is starting, a new day for Turkey."

The Supreme Electoral Council, known by its Turkish initials YSK, will still have to rule on the AKP's formal demand for a rerun of Istanbul election. It was not clear how long that decision would take.

Defeat in Istanbul would be especially sensitive for Erdogan, who grew up in one of its working-class neighbourhoods and built his political career after being Istanbul mayor himself in the 1990s.

The AKP has won every election since it came to power 17 years ago, in part by tying its success to the country's strong economic growth. But voters punished the party this time after a currency crisis last year hurt Turkish households, sent inflation soaring and tipped the economy into recession.

For his supporters, Erdogan remains the strong leader Turkey needs and one who speaks for more religiously conservative Turks. He survived a failed coup in 2016 and a referendum in 2017 granted him broader powers as president.

Critics say he has eroded Turkish rule of law and democracy especially after a crackdown following the coup that saw tens of thousands of people detained.

Erdogan had campaigned hard in Istanbul, presenting the vote as a matter of national survival. He put forward Binali Yildirim, a former premier and AKP heavyweight, as the party candidate.

But Imamoglu, a former mayor of a local Istanbul district, ran a more low-key campaign, reaching out to voters door to door to talk over local issues. He is already being credited with having revived the opposition's profile nationwide.

Erdogan himself described the Istanbul vote as marred by "organised crimes" and last week called for the ballot to be annulled.

Soon after the ballot, electoral authorities had said Imamoglu was ahead by nearly 30,000 ballots. But both he and the AKP's Yildirim claimed victory with early results showing such a dead heat.

That margin slowly narrowed to around 14,000 after a recount of void ballots over the last fortnight.

The CHP said on Tuesday the margin was around 13,800 ballots in favour of Imamoglu. Each candidate had won around 4 million votes.

Lingering uncertainty over the Istanbul election result more than two weeks after the ballot has been one factor worrying foreign investors and weighing on the lira currency.

With no new elections until a 2023 presidential vote, Erdogan's government has promised to focus on economic reforms to return the country to growth over the next four years.