Assad: Erdogan is a thief who stole factories, wheat and oil and today he is stealing lands 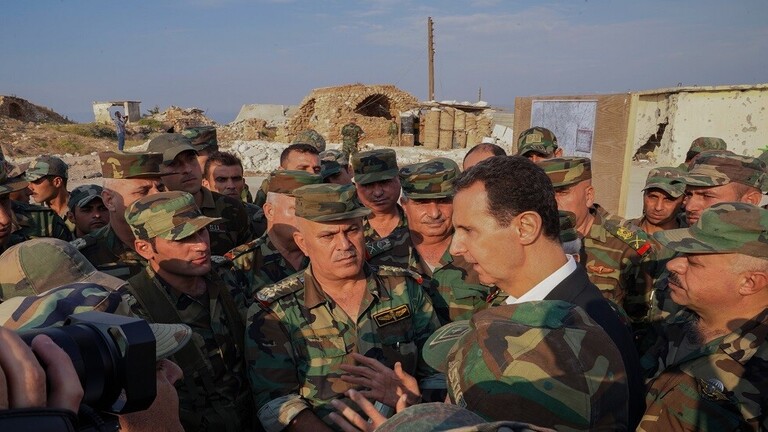 Shafaq News/ The Syrian President, Bashar al-Assad said that the Turkish President ,Recep Tayyip Erdogan "is a thief who stole factories, wheat and oil, and today he is stealing the land."

"When we are attacked or stolen, we should stand together and coordinate with each other, but some Syrians did not, especially in the early years of the war," Assad said during his inspection of the front lines in the strategic town of al-Habeit in the southern countryside of Idlib.  We told them don’t depend on outside depend on the army, the people and the homeland .but they didn’t listen.. And now their bet has moved to the American side. "

"After all what those have don’t tournaments that we have heard for years from some and that they will fight and defend, However, what we saw recently is that the Turkish side occupied large areas that were supposed to be under their control, within days as planned by the American " he said.

Assad expressed his government's readiness to support any group that resists, and to communicate with the various political and military forces on the ground, saying: "The first work we did when the aggression began in the north  was communication with various political and military forces on ground as we said we are ready to support any resistance group  .. it wasn’t   a political decision, but a constitutional and national duty. If we do not do this, we do not deserve a homeland."

"All areas in Syria are equally important, but the military situation on the ground is governed by priorities," Assad stressed

Facebook page of the Syrian presidency published a picture of President Bashar al-Assad accompanied by a number of officers and army elements in al-Hubeit town, which was liberated from armed elements last August.