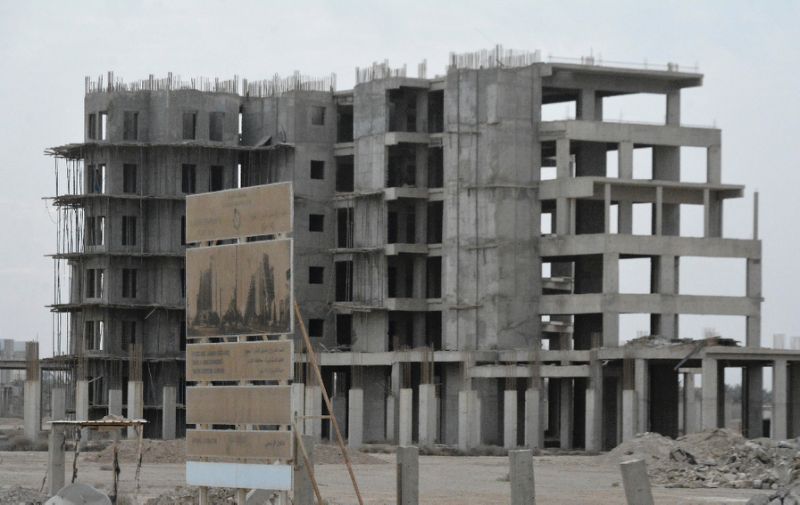 Visitors struggle to find hotels in the western Iraqi province of Anbar. This picture taken on February 9, 2018 shows one still under construction in the provincial capital Ramadi (AFP Photo/MOADH AL-DULAIMI)

The western region along the Syrian border was long held by Islamic State (IS) group jihadists, and few outsiders managed to venture into its capital Ramadi until the extremists were pushed out in 2016.

But today, traders, investors, contractors and construction workers are rushing in to the desert province, as business begins to resume after years of stagnation.

Karim al-Basrawi, a car-parts salesman in Ramadi on business, was hoping to stay in a hotel during a recent trip.

"When I arrived, I was surprised that there were no hotels," said the 35-year-old from the southern province of Basra.

After getting lost on the way to a meeting, he decided to knock on a door and ask the family if they knew the man he was looking for.

"They said yes and invited me in. After dinner and tea -- and after I repeatedly asked about the person -- they told me they didn't know him, but would send someone to look for him and that I should spend the night at their place."

Tribal traditions of hospitality transcend community affiliation. Karim, the visitor, is Shiite, but the majority of Anbar province is Sunni.

"Hospitality is a red line for us. We respect guests as we respect God," said Sheikh Mohammad Khalef al-Shaabani, leader of the powerful Shaabani tribe, who lives in Ramadi.

In Anbar, hotels are out of the question.

"We will never allow their construction. We'd sell everything we have to honour a guest," said the 45-year-old, wearing a red and white chequered keffiyeh headscarf.

"When we build our homes, we first think of the diwaniya (reception hall), which must be big, even if it means we must sleep in one room," he added.

Omar al-Nimer, a barber, said many families host guests even if they do not know the person.

"If he has the wrong address, for example, he'll stay with us for one night at least before we take him to the right person. He must eat and drink and relax at ours, otherwise people will talk about us."

French anthropologist Dawood Hosham, who is of Iraqi origin, highlights the "tribal" nature of cities like Ramadi when explaining the importance placed on hospitality.

"Under these circumstances, it is inconceivable that a visitor should be looking for a hotel, where local traditions dictate the duty of hospitality. This is the case with other cities in the province as well," explained Hosham, author of The Tribes and Power in the Land of Islam.

In the centre of Ramadi lies an abandoned concrete structure, the only attempt in 2013 by a Turkish company to erect a hotel in Anbar.

But construction stopped with the Islamic State group's takeover of the large swathes of the country in 2014. According to residents, even the jihadists stayed away from the building.

Anbar provincial council member Athal Obeid Dhahi said there is an urgent need to create hotels for "weddings, parties or receptions", but "it is useless because the tribes here do not accept".

The tribal opposition, combined with the area's delicate political and security situations, means "it is difficult to imagine any tourist movement in Anbar," said Dhahi.

Jihadist fighters still maintain a presence in the province, particularly along the Syrian border.

It was in Anbar that a large section of the Sunni community revolted against the Shiite-led government in Baghdad and welcomed IS jihadists -- who are also Sunnis -- as protectors, as they had done with Al-Qaeda 10 years before.

Although they quickly grew disillusioned, it was already too late: the extremist group had taken over the province and imposed its ruthless law.

But for Sheikh Mohammad al-Shaabani, the province's suffering in the past 15 years does not negate the importance of preserving tradition.

"Generosity is courage, and hotels nullify that courage," he said.

"We always tell our visitors: you are the boss of the house, and we are the guests."