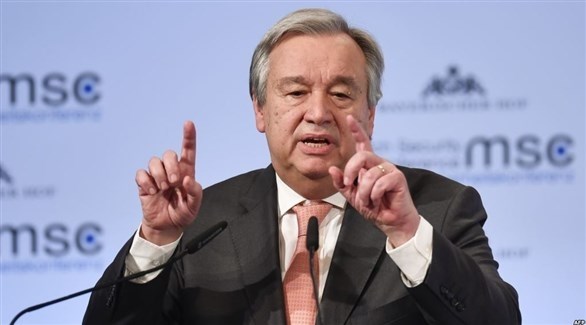 Shafaq News / The United Nations Secretary-General expressed, on Sunday morning, his "deep concern" over the repeated attacks in Iraq and the region.

In a statement, Antonio Guterres called on "all parties to take immediate steps towards calming the situation in order to prevent further loss of life, injury and destruction."

On Saturday, the Pentagon announced that two of the three American soldiers who were wounded in the latest missile attack in Iraq were in serious condition and being treated in a military hospital in Baghdad, the first confirmation that Americans were wounded.

The joint operations command announced on Saturday, that 33 Katyusha rockets fell on Taji base, north of Baghdad, in the second attack of its kind in a week on the base, which includes forces of the International Alliance.

Last Wednesday evening, Taji base was attacked by a missile that killed two Americans and one British, as Washington accused the Iraqi Hezbollah Brigades of being behind the attack.

Washington responded at dawn on Friday by striking security and military sites in the governorates of Babel, Karbala and Albukamal region on the Syrian border with Iraq.