Shafaq News / The Sunni Endowment Office announced that next Thursday, there will witness an astronomical phenomenon, which is the annular eclipse of the sun.

A statement issued from the endowment on Monday, stated that "a phenomenon that did not occur for more than 170 years will not be repeated until after 84 years is going to take place."

The statement added that this phenomenon "will be visible in most countries of the Arab world as well as Iraq, as the partial eclipse will continue for more than 40 minutes at sunrise." 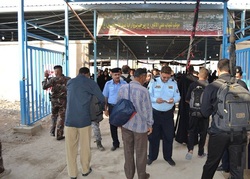