"The results of the laboratory tests conducted today showed that an Iranian religious science student who had entered Iraq before the ministerial crisis cell decision to prevent Iranian citizens from entering the Corona virus was infected," Health Director General ,Radwan Al-Kindi said..

He added, "The case was revealed when the health teams investigated the visitors and students in their homes and found doubts among this student, so he was referred to the hospital and sent for laboratory examination and placed in isolation halls, the results of the analysis showed that he is a carrier of the virus."

Iraq has taken a series of precautionary measures after recording cases and deaths in the eastern neighbor Iran, including a three-day ban on entry by Iranians to the country through border crossings, starting from Thursday, and the suspension of Iraqi Airways flights to Iran from the capital's Baghdad and Najaf airports.

last January, Baghdad decided to prohibit people from China from entering the country, while the Iraqi citizens were evacuated from Wuhan, China, where they were kept for two weeks in quarantine. 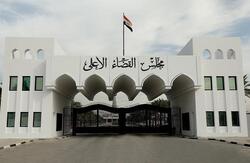