Shafaq News/ A parliamentary source revealed on Sunday that it is unlikely to hold a session by the parliament today.

The parliamentary source told Shafaq News that "it is unlikely to hold a session by the parliament today, which is scheduled to discuss the political and security crisis in the country, demonstrations and the resignation of Prime Minister, Adel Abdul-Mahdi."

The source attributed the non-convening of the meeting to the lack of agreement of the political blocs on voting on the resignation of Abdul Mahdi from office. 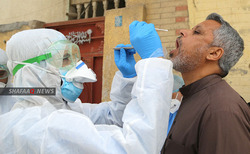