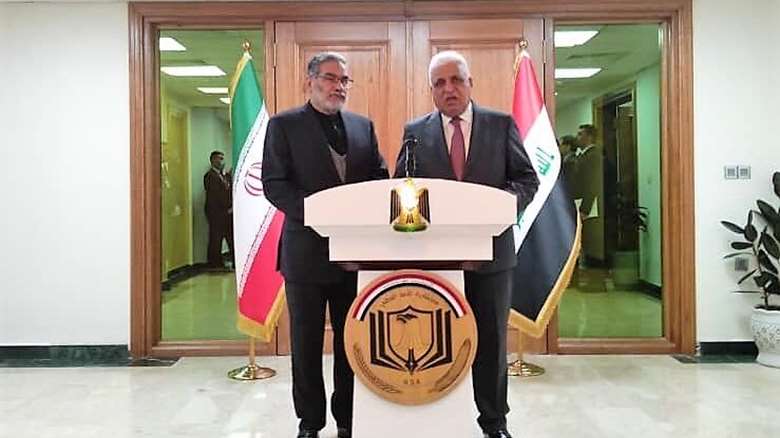 Shafaq News / The secretary of the Iranian Supreme National Security Council, Ali Shamkhani considered the position of the Iraqi parliamentarian regarding the demand for getting rid of the American forces "worthy of special appreciation."

Shamkhani said in a press conference in Baghdad with the National Security Adviser Faleh Al-Fayyad, "The Zionists are against the security and stability of the region," adding, "We hope that the day will come when there will be no trace of the Zionists in this region."

He added that " his country always wishes security and stability to Iraq, and there is no doubt that Iraq can play a role in regional and global issues in the near future."

The Secretary of the Supreme National Security Council of Iran added, "Since 2003, cooperation, consultation, participation and support between the governments and peoples of Iran and Iraq have been strengthened day after day in various economic, political, social, health and treatment fields."

The political and security expert, Hisham Al-Hashemi believed on Sunday that the visit of the Secretary of the Supreme National Security Council, Ali Shamkhani to Iraq, which he arrived yesterday, is to fill the gaps caused by the absence of General Qassem Soleimani.

Al-Hashemi tweeted, "Shamkhani came to fill the gaps in the political file caused by Soleimani's absence and the inability of his replacement to accomplish the mission;

The National Security Adviser Faleh Al-Fayyad met in his office today in Baghdad with Shamkhani, and during the meeting they discussed problems in the region and ways to solve them, and the prospects for developing relations between Iraq and Iran, according to a statement of the Al-Fayyad office.

The two sides discussed the political and strategic reality in the region and the impact of the spread of Corona disease in the region, especially at the level of communication between the two countries.

Salahuddin enters highest levels of curfew because of Baghdad