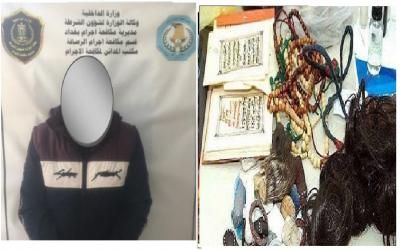 Shafaq News / The detachments of Al-Mada'in office in the Directorate of Anti-Crime of Baghdad affiliated to the Police Affairs Agency in the Ministry of Interior managed to arrest a suspect southeast of the capital, Baghdad.

The directorate said in a statement on Thursday, that the convict "blackmailed and threatened a woman by money in exchange for not telling anyone that she used to go to the convict ’s home to do sorcery, as well as not to publish her pictures on social media.

The statement added that the defendant had been investigated and confessed to his crime, as well as having carried out a number of blackmailing, the victims of which were mostly women, indicating that his investigative papers had been presented to the competent judge and he decided to arrest him according to the provisions of Article (456 Q.).