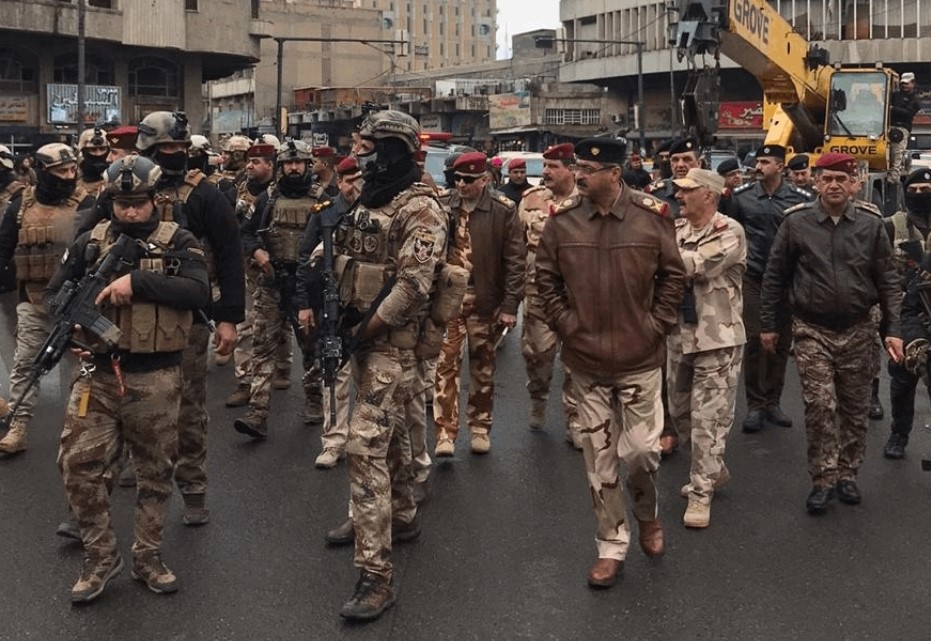 Shafaq News / The riot police tried to storm the protest sites in Tahrir Square in central Baghdad, after removing the sit-in tents in a number of governorates, the concrete barriers and reopening the closed bridges in the capital.

Coordination formats for the protest in Baghdad told Shafaq News, "The riot police advanced towards Tahrir Square after al-Khalani Square was reopened through al- Saadoun Tunnel."

It added, "The protesters worked directly to block the progress, and there was shooting in the air by the riot police, who withdrew afterwards without storming the square."

The security forces started on Saturday morning to remove the concrete blocks from Al-Khilani Square at the heart of the Iraqi capital, Baghdad, close to Tahrir Square.

Baghdad Operations Command said, "All the concrete blocks have been removed from Al-Khulani Square and opened to permanent vehicles movement."

Baghdad Operations Command had announced, on Saturday morning reopening "all roads" in the capital, after two closures, the first was by protesters and the second because of a massive protest against the American presence in the country.

"All roads have been opened, Muhammad al-Qasim road , Al-Tayaran Square, Al-Nidhal Street, Qurttuba Square are now being reopened permanently," the leadership said in a statement.

These developments come after the supporters of the Sadrist movement, Muqtada Al-Sadr, began withdrawing from the demonstration arenas scattered in Iraqi cities, shortly after a tweet by Sadr, who accused the protest arenas of dealing with supporters from abroad.

Al-Sadr's accusation came after protesters refused to participate in a million- demonstration that Sadr mobilized and Shiite currents close to Iran against the American presence in Iraq, after the United States killed the Iranian General Qassem Soleimani and the prominent leader in the popular mobilization forces ,Abu Mahdi Al-Muhandis.

Since dawn today, Saturday, what is known as the "shock" force has stormed the sit-in in Basra, burning the tents of the demonstrators and arresting a number of them.

A security official told Shafaq News that Basra Operations Command "asked the coordination committees for the demonstrations, not to demonstrate outside the selected places and this prompted them to launch the operation."