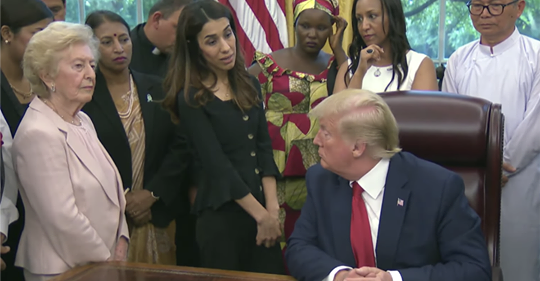 Shafaq News/ The Yazidi, Nadia Murad, Nobel Peace Prize laureate, said that the Yazidis cannot return to their areas because of the "conflict" between the Iraqi government and Kurdistan Regional Government on controlling these areas, as she put it

In a meeting with US President, Donald Trump at the White House along with a delegation of victims of religious persecution, Murad said that even after defeating ISIS, the Yezidis cannot return to those areas.

According to Murad, about 3,000 Yazidi women and children are still in captivity after they were abducted by members of ISIS in 2014.

Mourad was captivated in the aftermath of an attack with several of her relatives.

Trump has met a group of survivors of religious persecution, including Christians from North Korea, China and Muslims from Myanmar.

A new attack on US-Coalition convoys