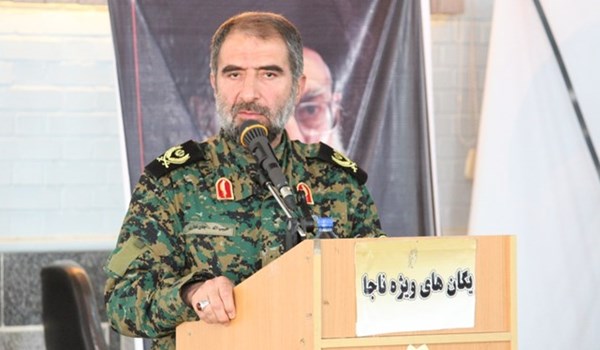 Shafaq News/ The deputy commander of the special units of the Iranian police Brigadier General ,Habibullah Jan Nathari said that the "resistance front" is "the greatest achievement of the Islamic Republic of Iran," pointing out that the cause of the current unrest in Iraq and Lebanon aims to weaken the resistance front in the region.

"The Resistance Front is one of the biggest achievements of the Islamic Republic of Iran," Brigadier-General Jean Nathari said at a ceremony marking the Nov. 4 anniversary of takeover the U.S. embassy in Tehran in 1979.

Asked about U.S. hostility to Iran, Brigadier General Jean Nathari said "As Trump has declared that oil is the reason for the American presence in Syria, we can conclude that the United States is trying to steal our resources and our oil."

Brigadier-General Jean Nathari talked about all the options of America to overthrow the Islamic revolution, adding that "the greatest achievement of the U.S. invasion , Saudi funds and policies of the Zionist entity is the formation of a resistance front."

"The current unrest in Iraq and Lebanon is aimed at igniting the resistance front," adding that "one front has been established from Afghanistan, Pakistan, Iran, Syria and Lebanon to Yemen."