Shafaq News/ A general strike in several parts of the capital, Baghdad was accompanied by closing major roads, a security source said on Sunday.

The source told Shafaq News that protesters began to close roads in several main streets in Baghdad, announcing the start of the general strike, which was demanded by several parties to force the government to resign and implement the demands of the demonstrators.

He added that protesters cut a main road in al-Bonok area, east of Baghdad  and in Zaafaraniya area southeast of the capital, as well as Baghdad-Wasit road.

He pointed out that several schools had closed their doors as well as returning the staff, to carry out the general strike.

Iraqi security and medical sources said at least one person was killed and 91 wounded in protests on Saturday in Baghdad. 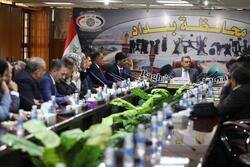