Shafaq News / The head of the Parliamentary Crisis Cell, Hassan Karim Al-Kaabi considered the epidemiological situation of recorded infections of Corona Virus Tuesday, and its rise in Baghdad to 71, a very serious alarm bell, warning of a "human and health disaster" in Iraq.

"The main and direct reason behind the increase in the recorded numbers of the virus is the failure to stick to the procedures for imposing curfews," either in complete or partial ones , "and the continued carelessness of a large number of citizens towards the seriousness of the epidemic and the lack of commitment to health guideline or preventive action done by the competent authorities, preventing gatherings, holding events, mourning councils, family visits and crowded places,” Al-Kaabi said in a statement received by Shafaq News Agency.

Al-Kaabi called on the competent authorities to "hold violators of the curfew laws and intensify the field epidemiological surveys, especially in the affected areas, as well as the necessity of coordination with the security forces to start the process of regional quarantine."

The Iraqi Ministry of Health announced on Tuesday, that two new deaths and 95 new cases of coronavirus were registered in the country within the past 24 hours, bringing the total number of infections to 2913, including 112 deaths, and 1903 recoveries, while the total number of people under treatment increased to 898. 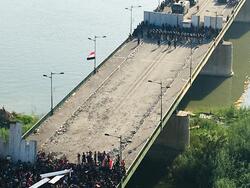