"Corona is a lie”.. WHO indicates causes of Covid-19 surge in Iraq

Shafaq News / The representative of the World Health Organization (WHO) in Iraq, Adham Ismail said on Sunday, that some Iraqis still deny the existence of Corona virus (Covid-19), which causes a spike in the number of confirmed cases.

"The first reason for the high number of infections is the citizens not adhering to the prevention measures since Ramadan until now and not implementing isolating cities effectively by the state," noting that "the second reason is isolating cities’ borders only, but the life inside them was normal,” Ismail said in a statement today to the Russian RT website.

"The third reason is that some citizens disbelieve the existence of Covid-19 , till today there are people who deny its existence."

Ismail pointed out that the rumors led to people behave normally exchanging visits and setting events.

"The state's receipt of new laboratories increased the tests and revealed new numbers of the active cases."

"The death rate in Iraq decreased by 3%," stressing that "Iraq currently has 22 laboratories for testing with Kurdistan Region,” he added.

Some networking sites in Iraq are circulating articles and video clips that suggest the non-existence of Covid-19, in what some describe as a "lie" or a "political game", amid warnings by the authorities from not dealing seriously with the disease that has spread throughout the world.

The Iraqi Minister of Health attributed earlier, the reasons for the increasing number of confirmed cases with Covid-19 is wider testing  in the specialized laboratories and field survey campaigns that revealed "hidden" cases, stressing the seriousness of the war against this virus because we do not know its source and when it will end.

Yesterday, the Ministry of Health reported 33 deaths and more than 1,200 new cases of Covid-19 in all regions of Iraq, at an unprecedented record rate recorded by the country since the outbreak of the pandemic.

The first Iraqi governorate might turn into distressed areas 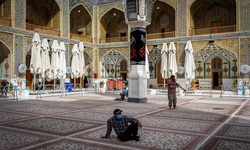