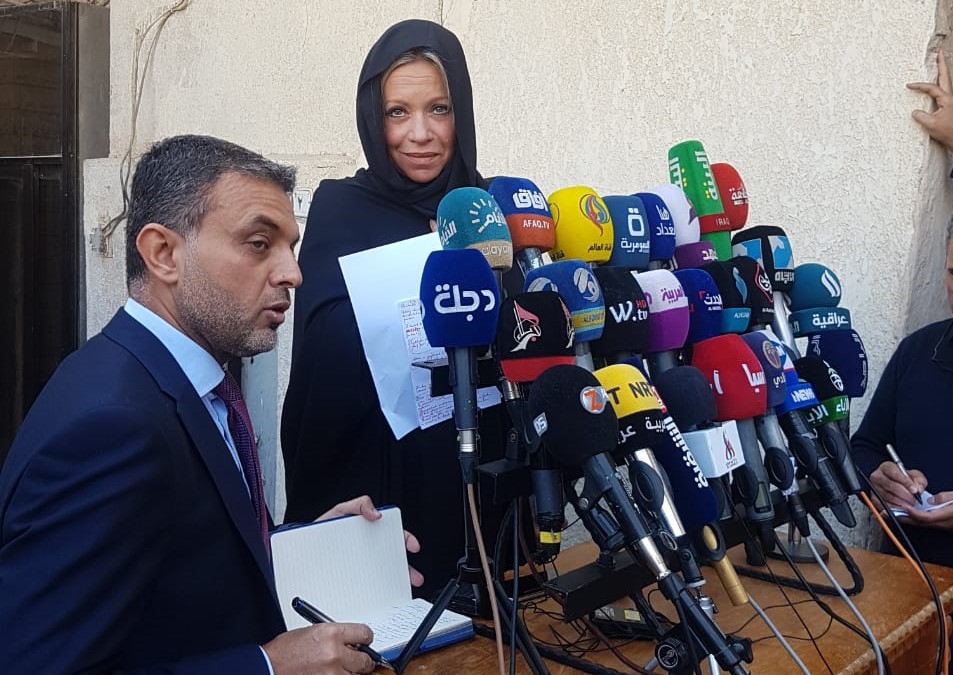 Shafaq News/ The representative of the Secretary-General of the United Nations in Iraq, Jeanine Hennis-Plasschaert said after meeting with the religious authority Ali al-Sistani in Najaf that the authority expressed concern about the lack of seriousness of political forces to precede with reforms.

"The situation in Iraq is the reason for the visit to al- Sistani," she said, as he   stressed during the meeting, the need not to use violence for any reason against the demonstrators, hold accountable against the perpetrators of this violence , stop arrests and kidnapping immediately and the need to work on real reforms within a reasonable period.

According to Plasschaert, Al-Sistani supported a unified electoral law and expressed "concern about the lack of seriousness of political forces in the reforms process."

“Peaceful demonstrators do not return to their homes without fulfilling their legitimate demands," she said, citing the country's top religious authority, If the authorities are unable or do not want to meet these demands, other path must be followed.”

"The UN mission is following up on what has happened over the past weeks, which is the result of great anger and discontent in the street for not providing services for 16 years. People have high hopes of fulfilling the demands," she said.

She added, "We emphasize on the sovereignty of Iraq always and advise by monitoring events, we are seeking to move Iraq forward, but it is time for the Iraqi authorities to implement what the demonstrators demand, this country cannot be the arena of conflict between countries."

This comes after a few hours, in which the United States urged the Iraqi authorities to hold early elections and carry out electoral reforms, calling for an end to violence against demonstrators that left hundreds of dead.

The White House said in a statement that Washington wanted the "Iraqi government to stop violence against protesters and President Barham Saleh to fulfill his promise to adopt electoral reform and hold early elections."

The statement expressed deep concern at the ongoing attacks against demonstrators, civilian activists, the media and the Internet ban in Iraq.

White House spokeswoman ,Stephanie Gresham said in a statement that Iraqis would not stand idly by as Iran depleted their country's resources , used armed militias and political allies to prevent them from expressing their views peacefully.

The White House added that it joins the United Nations in calling on the Iraqi government to stop violence against demonstrators , the adoption of the electoral reform law and early elections.

Protests have been shaking the Iraqi authorities, accompanied by bloody violence that has resulted since the start of the protests on 1st of October , killing 319 people, most of them demonstrators, according to an official toll announced on Sunday morning, injuring more than 12 thousand.

The Iraqi political blocs agreed on Saturday to put an end to the protests, at a time protesters accused them of their loyalty to Iran, which they consider the architect of the political system in the country.

After this agreement to "return to normal life" security forces intensified the suppression of demonstrators, while the country is still without the Internet and without social networking sites for nearly a week.