Shafaq News / Newly –appointed Iraqi Prime Minister Mustafa Al-Kadhimi informed the Washington and Tehran ambassadors on Saturday that Iraq will not be an arena for settling scores between the two countries.

This came in two separate meetings that Al-Kadhimi held with the ambassadors of the United States of America, Matthew Toller and Iran , Iraj Masjedi  .

Al-Kadhimi’s office stated in a statement that the latter stressed, during his meeting with the American ambassador, “the necessity of cooperation and coordination between the two countries in the economic and security fields, combating terrorism, preparing for strategic dialogue between the two countries and working to maintain security and stability in the region and keep it away from risks.”

Al-Kazimi indicated that "Iraq will not be the arena for the liquidation of accounts and the attack on any neighboring or friendly country."

For his part, the American ambassador affirmed that his country is ready to support Iraq in all fields, especially the economic side and combat Corona pandemic.

During his meeting with the Iranian ambassador, Al-Kadhimi affirmed, "Iraq’s keenness to establish the best relations with the Islamic Republic and all neighboring countries to serve the interests of the two neighboring peoples and security stability in the region," stressing that "Iraq will not be a passage or headquarters for terrorism or a springboard for attacking any country or square to settle accounts. "

For his part, the Iranian ambassador expressed his country's aspiration to develop bilateral relations and enhance cooperation between the two countries in all fields. 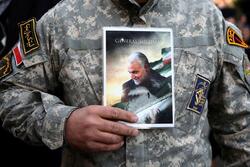 22 new cases of corona are recorded in Najaf .. Minister of Health: the increase is expected in Iraq