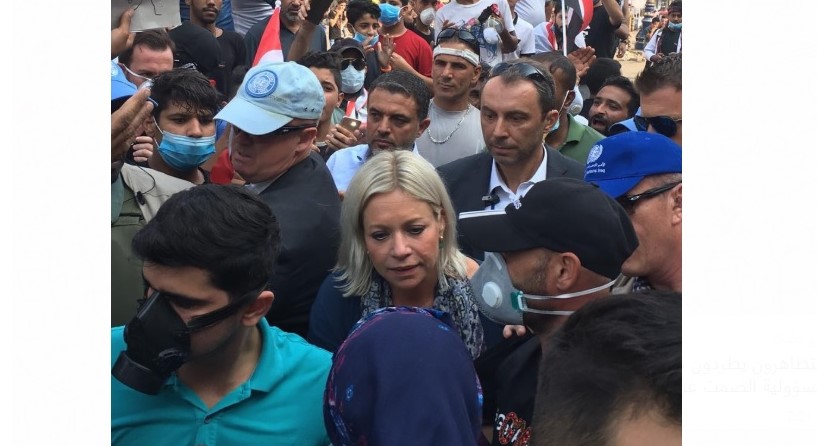 Shafaq News/ The Special Representative of the Secretary-General for Iraq, Jeanine Hennis-Plasschaert visited Tahrir Square, where crowds of protesters gathered in Baghdad.

According to a UNAMI publication, as part of our ongoing efforts to promote dialogue between protesters and the government, the Special Representative of the Secretary-General for Iraq, Mrs. Jeanine Hennis-Plasschaert, visited Tahrir Square to engage with people there.

The United Nations strongly condemned on Tuesday the continued deaths and injuries in anti-government protests in Iraq.

The head of the UN mission in Iraq, "UNAMI" Jeanine Hennis-Plasschaert said in a statement that "I condemn in the strongest terms the high number of deaths and injuries during the demonstrations."

"The most worrying is the recent developments in many parts of Iraq, especially in Karbala last night. Witness reports point to the use of live bullets against demonstrators, causing large numbers of casualties."

"Violence is never the solution, and protecting lives is an imperative," she said in a statement. "There is an urgent need for a national dialogue to find rapid and effective responses. This vicious cycle of violence must end."

She stressed that the United Nations stands "with the Iraqi people and is ready for this dialogue."

Since last Friday, Iraq has been witnessing a new wave of protests faced by security forces with repression, leaving at least 80 people killed and thousands wounded.

The current wave of protests is the second of its kind in October, as two weeks ago witnessed the deaths of 149 protesters and 8 security personnel.

Protesters first demanded better public services, job creation and anti-corruption before their demands raise to topple the government after the army and security forces used excessive violence against them, which the government acknowledged and promised to hold those responsible to accountability.

Since the protests began, the government of Adel Abdul-Mahdi has adopted several reform packages in several sectors, but has not satisfied the protesters who insist on overthrowing the government.

There is widespread resentment in the country with the government's violent handling of the protests, while observers believe that the new wave of protests will put increasing pressure on Abdul-Mahdi’s government, and may lead to its overthrow.

Iraqi President: I will agree to early elections according to a new law

The Budget bill will be voted upon by the end of this week, MP confirms

A second rocket prepared to launch in the Green Zone