The situation in Sinjar is "intolerable," Takadum says 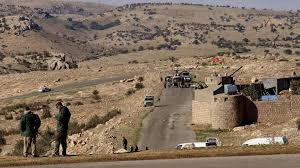 Shafaq News / The Takadum Alliance, led by Parliament Speaker Muhammad al-Halbousi, said that the situation in the Sinjar district "cannot be tolerated" and that governmental and parliamentary action must be taken to resolve the crisis.

"The only solution for Sinjar is to implement the Baghdad and Erbil agreement; otherwise, the residents would return to the suffering that started eight years ago," Nineveh MP Mozah Ahmed Al-Khayat told Shafaq News Agency.

The Takadum representative believes that "the prestige of the army must prevail because it represents Iraq and Iraqi law, and the series of attacks on the security forces must be put to an end and the presence of the PKK and its supporters in Sinjar."

"Without solving this issue, Sinjar will not enjoy the safety, and the crises will not end because the main victims of all the problems are the displaced, whether they are Muslims or Yazidis."

On Tuesday, the Kurdish Directorate of Crisis Response and Management (affiliated with the Ministry of Interior) revealed that more than 700 families had been displaced from the Sinjar district due to the clashes between the Iraqi army and the Sinjar Resistance Units (YBS) loyal to the Kurdistan Workers Party.

In a press conference, Hussein Kalari, the directorate's head, said that the "injustice" in Sinjar is not new. Instead, it has become a continuous process, and so far, 74 firmans have been implemented in Sinjar."

On the conflict between the Iraqi army and the PKK's YBS in the disputed area, he said that 701 families (4,083 people left Sinjar until last night, heading to Duhok Governorate.

The displaced are now distributed over the camps, outdoors, and in their relatives' houses.

The Joint Operations Command (JOC) renewed its rejection of any outlaw armed groups being present in Sinjar.

The spokesman of the Command, Maj. Gen Tahseen al-Khafaji, told Shafaq News agency, "we will not allow any outlaw force to be present in Sinjar."

Al-Khafaji noted that some parties tried to hinder the implementation of the Sinjar district.

He added that the Iraqi army is the only eligible party to administrate Sinjar, pointing out that the west Nineveh Operations Command is responsible for this file.

Earlier today, the deputy head of the Joint operations command, Abdul Amir al-Shammari, announced that the Iraqi forces had taken complete control of the Sinjar district.

On the sidelines of his visit to the district, he told our agency that the Nineveh operations command handled the situation professionally yesterday.

The Iraqi army's operations aim to achieve security in the district and pave the way for the reconstruction of the district, al-Shammari pointed out.

On October 9, 2020, Baghdad and Erbil reached an agreement to normalize the situation in Sinjar, according to which the district will be jointly administrated.

ISIS invaded Sinjar district in 2014 and committed a massacre against its residents before the Peshmerga forces regained it the following year.

There are currently two local governments for Sinjar, one of which was appointed by the federal government authorities. The second is the elected government, which runs its business from the Duhok governorate.

The PKK rejected repeated calls from the Kurdistan Region to leave its territory, which gets subjected to Turkish attacks that impede the return of tens of thousands of displaced Yazidis to their homes.

Turkish forces target a site of the Asayish- Ezidikhan in Sinjar