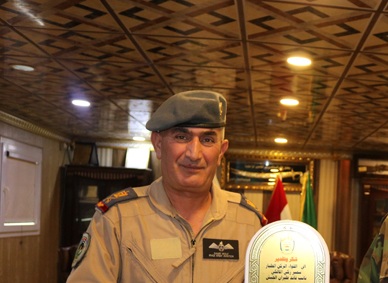 Shafaq News / The Iraqi Army Aviation Commander, Pilot Lieutenant General Samir Zaki Hussein Al-Maliki, issued on Saturday an apology statement to the Prime Minister, Mustafa Al-Kadhimi, the ministers, security leaders, and his neighbors after the security incident that took place near his residence.

In a statement received by Shafaq News agency, Al-Maliki, "In my name, the pilot Lieutenant General Samir Zaki Hussein al-Maliki, and on behalf of my family, I offer my apologies and regrets to the Commander-in-Chief of the Armed Forces, the Minister of Defense, the Minister of Interior, the Chief of Staff of the Army and all the units, departments and security institutions and combatants at all levels of government and our neighbors in Al-Mansour area 615 in Baghdad. "

Al-Maliki apologized for the anxiety and the unnecessary distraction the incident triggered, noting that he did not apply any additional security measures for his residence and family to avoid disturbing the neighborhood.

The security forces thwarted on Thursday night an IED attack targeting the Iraqi army's aviation commander in the Iraqi capital Baghdad, according to a security source.