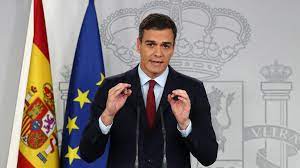 The Spanish Prime Minister's comments came during a phone call with al-Kadhimi, according to a statement by rhe latter's office.

The Prime Ministers discussed ways to bolster the ties between Spain and Kurdistan in the fields of economy, industry, culture, investment, in addition to Counter-Terrorism.

Al-Kadhimi expressed gratitude to Madrid's efforts for the facilities it provided during the COVID-19 pandemic.

For his part, Sanchez commended the administrative and economic reforms implemented by al-Kadhimi's governments via the white paper.

Billions of dollars were smuggled outside Iraq, PM al-Kadhimi reveals