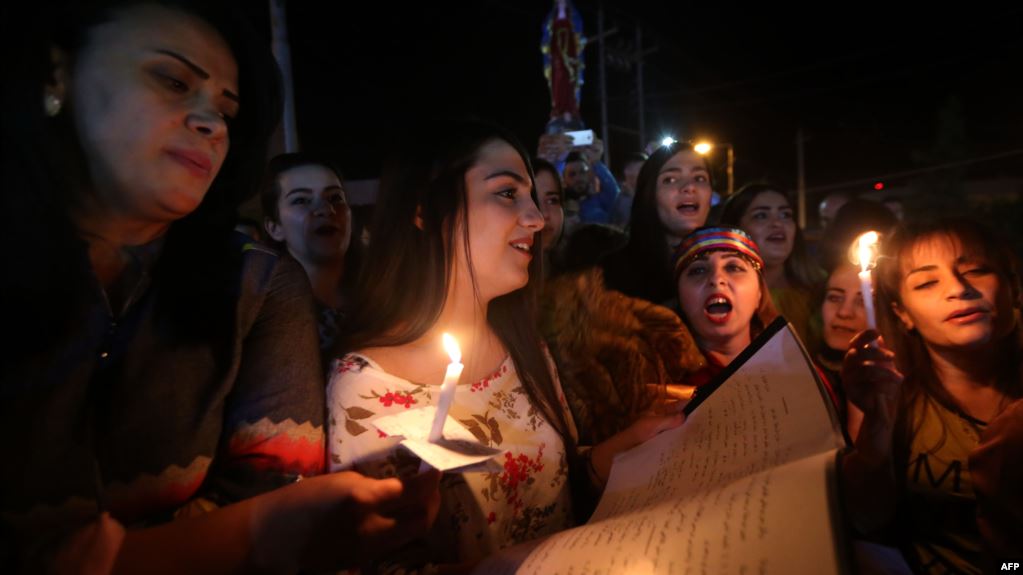 Shafaq News/ On March 7, Pope Francis stood on the back of the white, open-air Pope-mobile. He waved to thousands of cheering Iraqi Christians who filled the stands of Franso Hariri Stadium in Irbil, Iraq, before celebrating Mass

Meetings with Iraq President Barham Salih, Prime Minister Mustafa Al-Kadhimi, Grand Ayatollah Ali al-Sistani; a memorial prayer for victims of the war in Mosul, and a visit to the northern Iraqi town of Qaraqosh — once devastated by the Islamic State group — are other events touted as moments of hope for the diminishing Iraqi Christian population from the Holy Father’s trip to the country March 5-8.

Some even credit the mere scheduling of the trip as an agent of change in Iraq. After the trip was announced, the Iraqi Parliamentary Assembly voted unanimously to declare Christmas an annual national holiday, and Salih ratified a law benefiting Yazidi survivors of the 2014-2017 ISIS genocide. Both of those developments happened months before Pope Francis boarded the Papal plane.

However, months removed from the trip, experts say nothing has changed.

“I have not seen any changes with the Iraqi government that would give any indication that they’ve made any shifts in the way that they are dealing with Christians,” said Nadine Maenza, chair of the United States Commission on International Religious Freedom.

Maenza and Ed Clancy, director of outreach for Aid to the Church in Need, identify security and a lack of economic opportunity as the most significant issues Iraqi Christians face.

“Christians, when they live in the cities, are in a very difficult situation because they don’t have a large enough community to protect themselves,” Clancy said. “When they live out in these smaller towns in (the Nineveh Plains), or, places outside of Irbil, they are relatively safe, but it’s only relative to how well the government might respond if something happens.”

Maenza added that there’s also a governance issue in the Nineveh Plains. There are still disputed territories where both the Kurdistan Region and Iraqi government have claimed land but not invested in it, leaving gaps where there’s no governance, she said.

Maenza said a lack of economic opportunities forced many Christians to leave.

“When young people can’t get jobs, and there are no jobs because it’s not safe enough for businesses to invest and build the economy,” she said, “you have this situation where so many Christians have left because there’s no possibility for a future for their children, for their families.”

The number of Christians in Iraq has declined for years. Today, the number is estimated to be in the 300,000-500,000 range, compared to about 1.5 million that lived in the country in 2003, before the United States invasion that toppled the Saddam Hussein government.

Maenza made it clear that a lack of progress in recent months isn’t a reflection of Pope Francis’s trip since one visit was never going to change the existing conditions. What the visit did, she said, was for a moment shift the world’s eyes back onto the plight of Iraqi Christians.

“There was so much goodwill towards Christians, and Christians needed that,” she said. “They needed to not always just be seen as a victim, but to be seen as an important part of the fabric of Iraq, that they contribute to Iraq, that they should stay, that the government needs to make a way for them to stay.”

She and Clancy acknowledge it will be tough for Iraqi Christians to solve the problems they face by themselves. Aid to the Church in Need announced last week that 2020 was its highest fundraising year ever with $122 million in individual donations.

Over the years, the organization has also built schools and taken on other projects to try and redeem a quality of life and opportunities for Iraqi Christians. And while those projects and donations help, Clancy said any lasting change has to come from diplomatic pressure.

Maenza agrees, adding that it’s up to the United States, in particular, to apply that pressure with the amount of money the federal government provides Iraq. Part of the problem, she said, is a lack of urgency because the crimes aren’t on the level of ISIS.

“The crimes being committed, while it’s slower, you still have the same ethnic cleansing where they’re bringing in and doing demographic change in the Christians,” Maenza said. “Because [the crimes] are not rising to this level of ISIS, it’s just the world isn’t looking, and even though policymakers hear about it, it’s just not enough to get their attention.”

If the “beyond urgent” situation isn’t addressed, Maenza fears there could once again be atrocities on a broader level that will force Iraqi Christians to leave or survive hostile forces. She said a priority needs to be governance in these gap areas in the Nineveh Plains, where many Christian communities exist.

“It’s got to be grassroots, bottom-up governance, so people feel they have a say in their futures, and that is the way to long term beat this extremism,” Maenza said. “Weapons alone are just not enough.”