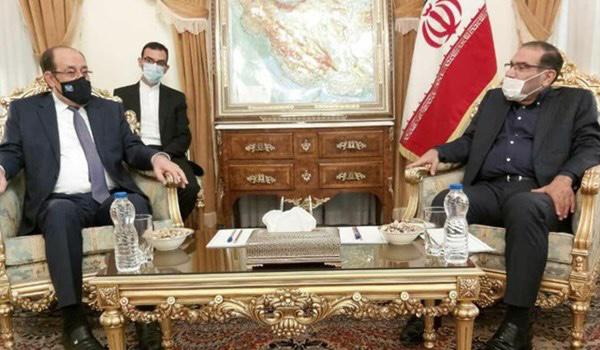 Shafaq News / The Secretary of the Iranian Supreme National Security Council, Ali Shamkhani, warned on Monday, during his meeting with the head of the State of Law coalition, Nuri al-Maliki, who is currently visiting Iran, against the attempts of those he called "enemies" of Iraq to exploit the upcoming elections.

Shamkhani also reminded al-Maliki of the “cost” of the killing of Qassem Soleimani and Abu Mahdi al-Muhandis, which is the “uprooting of USA and Israel from the region.”

He said, according to the Iranian news agency "IRNA", that "USA is trying to stir up differences in the region," noting that "the priority of regional countries to confront this problem is to strengthen solidarity among them."

He added, "The enemies of Iraq who do not want progress and prosperity for it, are trying to use the upcoming elections to spread the differences and conflicts and thus create chaos in this country."

"I am sure that the blood of Qassem Soleimani, Abu Mahdi Al-Muhandis, and all the martyrs of the resistance, and their sincere sacrifices, will uproot USA and the Zionist entity from the region," he declared.

"The Zionist entity is seeking, through the so-called peace, to control the area from Nile region to the Euphrates, but the Islamic world will not allow the realization of this dangerous and treacherous project at all," he emphasized.

For its part, the head of the State of Law coalition praised the Islamic Republic's stances in combating terrorism and promoting regional stability and security; calling for " efforts between Iran and Iraq regarding important issues in the region and the world."

Al-Maliki stressed the need to enhance harmony in the Islamic world and limit policies that harm the identity of Muslim countries, saying, "Just as we were able to unite and resistance to defeat terrorism outside Iraq and the region, Islamic countries can, through cooperation and solidarity, thwart all threats facing Al-Quds Al-Sharif and the Palestinian cause."