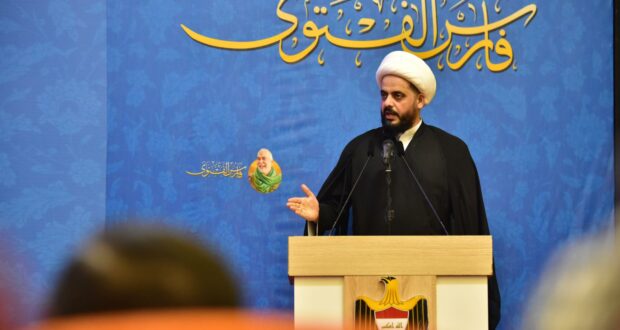 Shafaq News/ The Secretary-General of the Asa'ib Ahl al-Haq movement, Qais al-Khazali, warned of "external conspiracies" seeking to incite strife between the Iraqis, highlighting the precipice of the recent security turbulence in the southern governorate of Maysan.

Al-Khazali said in a televised speech earlier today, Wednesday, "the issues in Maysan infer a huge peril. There is a total security failure and no control of law."

"The assassination of a judge is a serious indication for the presence of powerful narcotics mafias in Maysan," he said, "the assassination of an officer affiliated with the Ministry of Interior is evidence that these gangs can reach the inside of the security institutions."

"External conspiracies attempt to exploit the gaps and cause dissension between the people of the same country," he continued, "there are no problems between al-Salam companies and Asa'ib Ahl al-Haq."

The southern governorate of Maysan has witnessed a series of assassinations targeting Judicial and security officers, in addition to civilians.

The recent security turbulence prompted the caretaker Prime Minister, Mustafa al-Kadhimi, to visit the Maysan and establish an Operations Command in the governorate.

Al-Khazali: Iraq is going through a "political blockage"