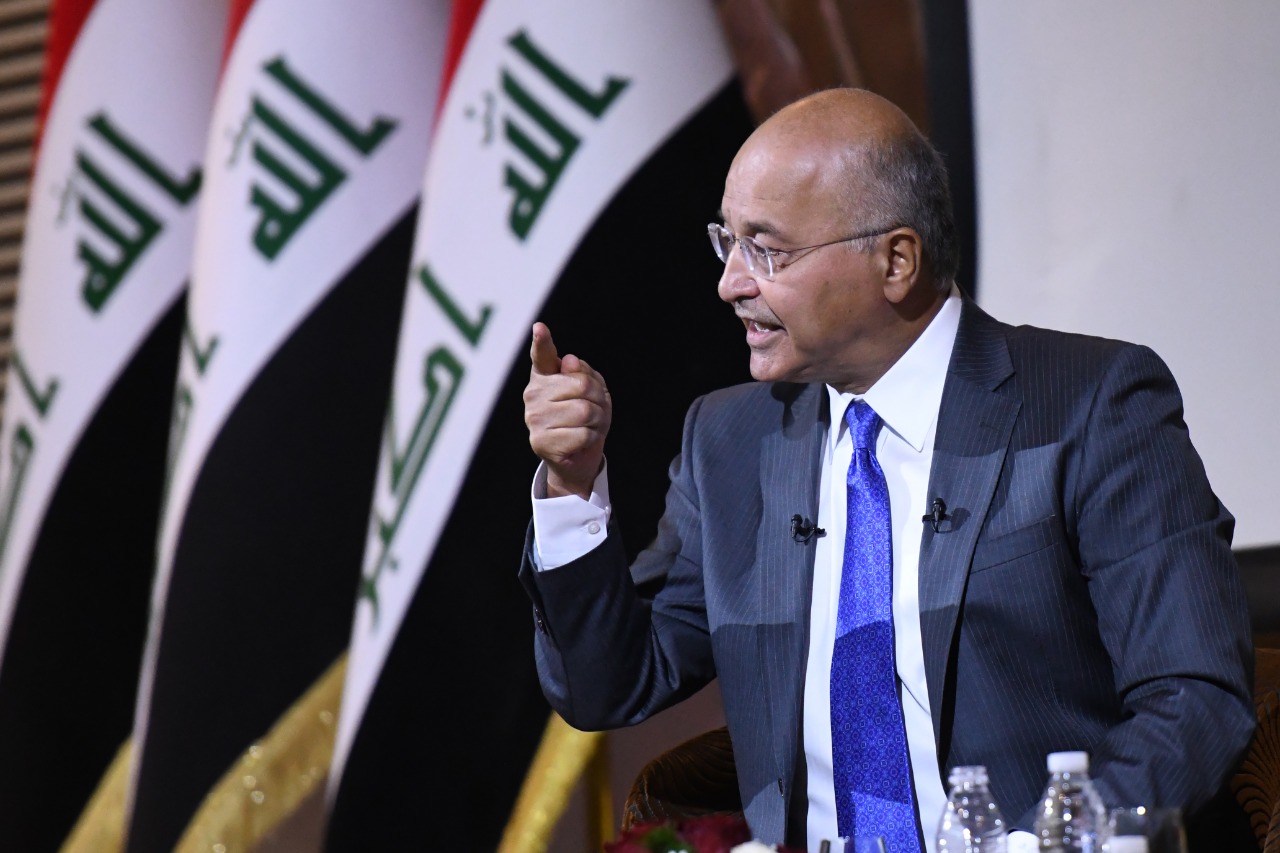 Shafaq News/ The Iraqi President Barham Salih said that the situation in the Region is ahead of Iraq, calling for expediting the economic developments and preparations for a new political contract.

In a speech he made yesterday at Bahr al-Ullom Forum for Dialogue, President Salih emphasized that serious demands represented by laying the ground for new political contract are still ahead of our country to be met.

He noted that Iraq's project must be a national project that will be built by the Iraqi politicians within the country through having a capable and strong state that could serve its citizens and use the country's resources to serve its people and to be a peaceful state that gives priority to the peace in dealing with its people and to hold a dialogue with its neighbors.

"Electoral fraud and manipulation is a gross violation of the state's sovereignty, and it is vital to secure polling centers and protect ballots in order to guarantee state's sovereignty. The supreme religious authorities in Najaf have come out with a very powerful statement, calling on all the Iraqi to defend the country, and it was a national project that aims to protect Iraq so we have to talk about it."

President Salih said, "enormous tasks in economic developments and preparing the ground for new political contract and for the new situations in the region are ahead of our country. Iraq continues to suffer from the political gridlock that needs to be resolved out of the ordinary."

President Salih stated that the country's next elections will be held as the results of the popular protests demanding for creating new political contract that can best serve the Iraqi, and where the people are fed up with the current political situation, and there is a doubt over the impartiality and the credibility of the previous elections process. He stressed that having an effect on the free expression of the will of the voters is the grave violation of the state's sovereignty, and the sovereignty begins with ensuring respect for the rights to vote and combating electoral fraud. Restoring the legitimacy of the state is based on having free and fair elections and there should be no fraud or electoral manipulation, he added.

Moreover, he said that there is a doubt over the impartiality and the credibility of the elections process that is based on what happened at the previous election is not easy. Therefore, United Nations' efforts in monitoring and the oversight the country's next federal elections are required.

"According to experts Iraq oil imports since 2003 until the present day is estimated to have been around $ 1000 billion. $ 150 billion are suspected of being corrupted, and taken out of the country. Financial corruption is considered as the political economy of the violence and of chaos, and it undermines the state ability and breaches its sovereignty."

"If the situation in Iraq remains the same without being changed, and the corruption is not addressed, and the funds stolen is not recovered as it’s an essential pillar of the state, we will not achieve our aspirations for having good governance, said President Salih.

Regarding the regional situations, historically, Mesopotamia was a point of balancing and disputes in the region, he said, while today, stability can't be achieved in the region without having a strong, capable and sovereign Iraqi state. Any interference in Iraq's internal affairs by another state will lay the ground for another interference so the spiral of the crisis in the country will continue, and everyone has to pay for it," he added.

"Iraqi populations would reach 80 million by 2050," Salih noted, "while studies indicated that the oil revenue will decline as the results of dropping in demand for oil after increased use of alternative and renewable energy."

"Iraq's oil reserves will not provide a better future for the Iraqi generation to come, and we had a similar situation in Iran, Saudi Arabia, Jordan and in all our neighbors. These should therefore be addressed through working together to confront the challenges that we face on the basis of a national, sovereign Iraqi state."

Macron among 14 heads of states on potential spyware list