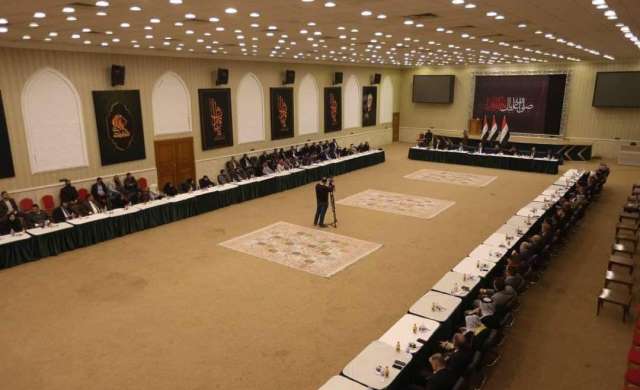 Shafaq News/ A member of the Coordination Framework revealed political efforts to converge views with the Sadrist bloc to discuss the new government's mechanism.

Spoke on condition of anonymity, the source told Shafaq News Agency, "The Command of the Framework received several calls from heads and leaders of political parties and met them to discuss the repercussions of the parliament's opening session."

"There is a political effort from the leaders of the blocs to converge views between the Coordination Framework and the Sadrist and discuss the mechanism of forming the new government according to the political and legal entitlements."

Concerning the participation in the next government, he said that the Framework's supreme body has not yet taken any official decision.

Last week, the leader of the State of Law, Wael Al-Rikabi, told our Agency, "Al-Sadr sent a message to the Framework that he will not participate in any government with Nuri Al-Maliki despite that the two parties agreed on forming the largest bloc and the new government."

"The Framework is coherent and cannot accept to exclude one of its most potent parties, especially that the State of Law has the highest number of parliamentary seats among the Framework forces." He said.

Al-Rikabi stressed that the negotiations with Al-Sadr are continued to form the largest bloc and the government without eliminating any political party.

It is worth noting that the Sadrist bloc emerged as the clear winner with 73 seats in the 329-seat parliament. Takadum party, one of two main Sunni political groups and led by the speaker of the outgoing parliament Mohammed al-Halbousi, followed with 37 seats. Former prime minister Nuri al-Maliki's State of Law bloc came third with 33 seats.

Sunnis and Kurds to boycott dialogue meetings not attended by al-Sadr, source