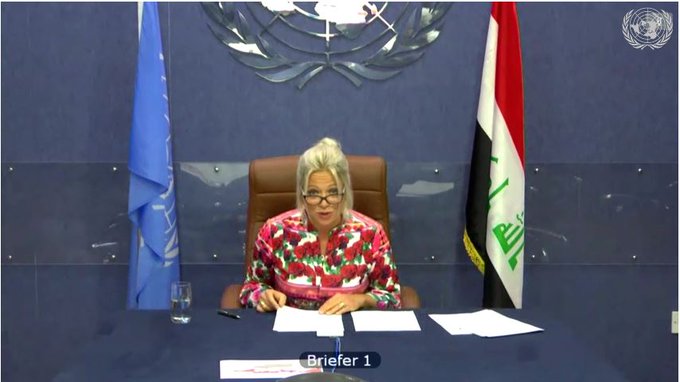 Shafaq News / The Special Representative of the Secretary-General of the United Nations in Iraq, Jenin Hennis-Plasschaert urged on Wednesday to hold "free and fair" elections in the country, encouraging both the Kurdistan Regional Government and the federal government to continue discussions in order to resolve the differences and outstanding issues between them that have been going on for 15 years.

Plasschaert said, "Iraq is expected to witness a decline of 9.7% in GDP and oil revenues have nearly halved, which has been hit hard by the sharp collapse in crude prices."

She pointed out that “we express our concern about targeting the activists and human rights defenders."

Regarding early elections in Iraq, Plasschaert said that "the work of the Independent High Electoral Commission must be strengthened and freed from constant political pressures," calling for free and fair elections to be held in the sixth month of next year.

She also said, "The Independent High Electoral Commission needs to adopt practical measures to face electoral challenges and build public confidence in its neutrality and capabilities, by adopting a comprehensive and inclusive voter registry, a transparent, tested and reliable election results system, and a wise framework for dealing with complaints and appeals.”

On the differences and outstanding issues between Erbil and Baghdad, The Special Representative said that constructive negotiations are the only viable way forward.

The UN representative continued by saying that "after 15 years, the problems between the two sides are still not resolved," calling for addressing the problem of salaries in the Kurdistan Region.