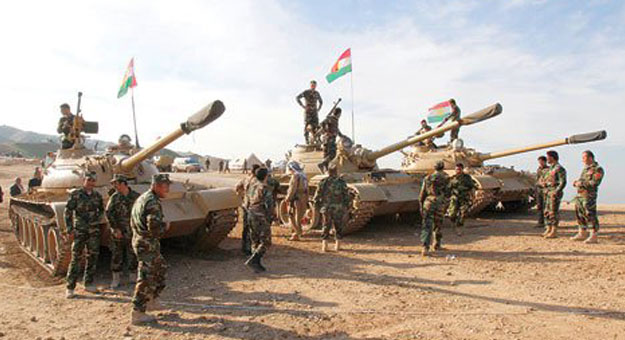 Shafaq News/ The Peshmerga forces have intensified the security precautions and fortifications at the Kalar-Diyala borders to curb security breaches similar to those in Khanaqin Kirkuk recently.

The commander of the Peshmerga’s third brigade stationed ad Kalar-Diyala borders, Lieutenant Colonel Jalil Faiaq, said in a statement to Shafaq News Agency, “the forces intensified the fortifications and enhanced its presence in the areas against the backdrop of the attacks that took place in Khanaqin district and Kirkuk city.”

“The Peshmerga has fully secured the Kalar-Diyala borders. We have not registered a single case of infiltration or attack against a security checkpoint of the Peshmerga forces over the past period,” he added, “our forces are pursuing and investigating terrorist hotbeds and enclaves to terminate them.”

Kalar’s Deputy Commissioner, Shahab Haji Ahmed, said in a statement to Shafaq News Agency, “the forces leveled up the caution and alert in Kalar perimeters to confront any security emergency,” hinting at “high-level coordination between the forces and the Iraqi army at the Kalar-Diyala borders to secure the sectors.”

The Quick Reaction Forces started opening roads into the marsh areas and dense forests east of Diyala governorate from the other side.