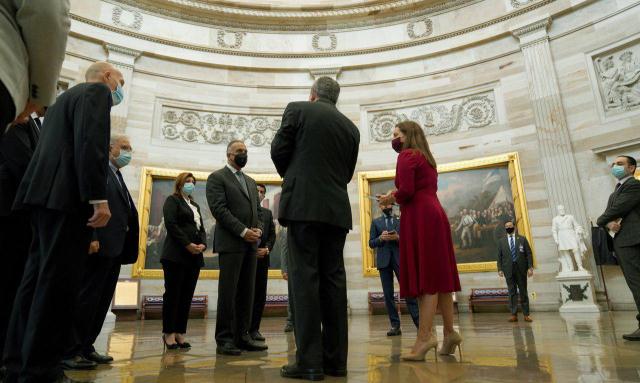 Shafaq News / The Iraqi Prime Minister, Mustafa Al-Kadhimi confirmed, on Saturday, that dealing with Iraq should be in accordance with the principle of "sovereignty", and he also indicated that the strategic dialogue with the United States resulted in "important issues."

It added, "During the meeting, they discussed how to develop bilateral relations between Iraq and the USA in the security, economic, educational and other fields, and they also emphasized to increasing the empowerment of the Iraqi security forces, and the issue of displaced and minorities."

The statement explained that "the cooperation between Baghdad and Washington is not limited to the security and military side only, but go to various fields including rehabilitation and reconstruction of Iraq and building economic partnerships."

Al-Kadhimi referred to "the form of the relationship between the two countries after the end of the war against ISIS, and stressed that the strategic dialogue issued several important points, which would establish a new phase of bilateral relations."

For her part, the US House of Representatives Speaker Nancy Pelosi, according to the statement, welcomed the Iraqi Prime minister and his accompanying delegation, and praised the efforts made by the Iraqi government in the issue of the displaced.”

In this context, Al-Kadhimi affirmed that his government is determined to return the displaced to their original areas and solve the problems facing Iraq's minorities.

As part of his visit to Washington, Al-Kadhimi met a number of American officials and members of the American Businessmen Forum and the American Chamber of Commerce.

Al-Kadhimi to Tueller: Iraq is committed to the security, economic, and diplomatic cooperation with US