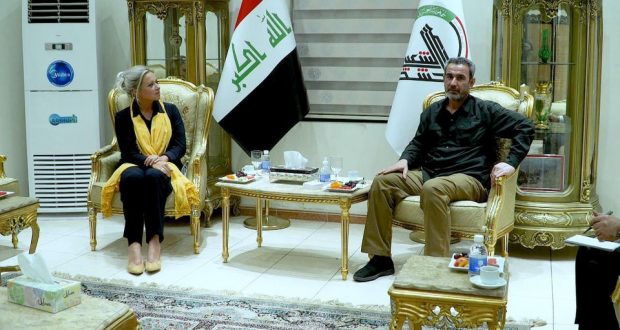 Shafaq News / A government source stated that a committee has been formed by Al-Hashd Al-Shaabi, headed by Abdulaziz Al-Muhammadawi, to investigate the missile attacks that targeted the Green Zone.

This is the first time that Al-Hashd investigates the missile attacks, although some of its factions, especially those close to Iran, have been repeatedly accused of being behind the attacks.

The source told Shafaq News agency that the formation of the committee came after accusations were made to Al-Hashd for being behind the attacks and facilitating transporting missiles with official vehicles.

The source pointed out, "This directive was issued by the head of the commission, Faleh Al-Fayyad, after an urgent meeting with Prime Minister Mustafa Al-Kadhimi last night."

The formation of the committee comes a day after unidentified persons fired eight Katyusha rockets at the Green Zone, most of which landed on residential buildings.

Washington accuses armed Iraqi factions linked to Iran of being behind the attacks, which target its embassy and military bases, in which American soldiers are deployed in Iraq.

Armed Shiite factions, including the Iraqi Hezbollah Brigades, Asaib Ahl al-Haq and Harakat al-Nujaba, have threatened to target US forces ’presence in Iraq if they do not withdraw in compliance with the Iraqi parliament’s decision to end the military presence in the country.

On January 5, the Iraqi parliament voted by a majority to end the foreign military presence in the country.

This came after the assassination of the former commander of the Iranian Quds Force, Qassem Soleimani, accompanied by the deputy head of Al-Hashd Al-Shaabi, Abu Mahdi Al-Muhandis, in an American air bombardment near Baghdad International Airport.

PMF: the attack on the Democratic Party headquarters was a criminal act

Ahead of the Supreme Court ruling on al-Ameri's complaint, PMF vehicles banned from entering Baghdad