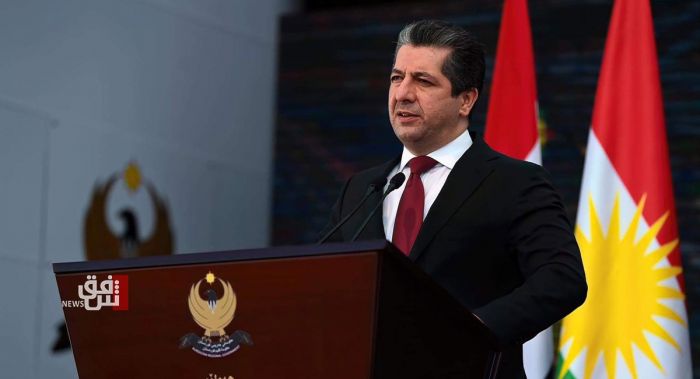 "I strongly condemn the rocket attack that took place last night on the outskirts of Khabat district," the Prime Minister said in a statement.

Barzani called on the Federal Prime Minister, Mustafa Al-Kadhimi, "to take the necessary steps to inflict penalties against the outlawed groups" behind these attacks.

He also called for the formation of "a joint committee to take the necessary measures to control those areas that have become a threat to the stability and security of the Kurdistan Region and Iraq."

"These attacks must not continue, there must be a serious attitude, and practical measures must be taken to end these attacks," Barzani concluded.

In a tweet he posted later, Barzani said he had urged Kadhimi "to take practical steps to hold the outlaws accountable for last night's rocket attack on Erbil."

"Joint security control must be restored in the area used repeatedly to undermine the security of the Kurdistan Region and Iraq," he added.

Six rockets struck the Khabat district in Kurdistan's capital city, Erbil, near one of the region's largest oil refineries late last night in the latest attack targeting energy infrastructure in the country.

The rockets were meant to impact power supplies in the region, Iraq's security forces said on Twitter.

"This evening, six Katyusha rockets targeted an area in Khabat district in western Erbil," a spokesperson for the Kurdistan Regional Government (KRG), said on Twitter, "the attack resulted in no casualties or material damages. The rockets were launched from Bartella town in Nineveh."

They hit the 136,000 b/d Kawigosk refinery, run by Kurdish oil company Kar Group, and were in the same area that three rockets struck on April 6.

A compound owned by the head of Kar Group, Baz Karim, was also hit by a missile attack on March 13, with Iran's Islamic Revolutionary Guard Corps claiming it was targeting an Israeli base.

Karim has denied that his compound was hosting any Israeli activity.

Kurdish officials say that the attack was an attempt by Iran to intimidate the regional government over plans to export natural gas to Europe, if a pipeline connection to Turkey can be built.