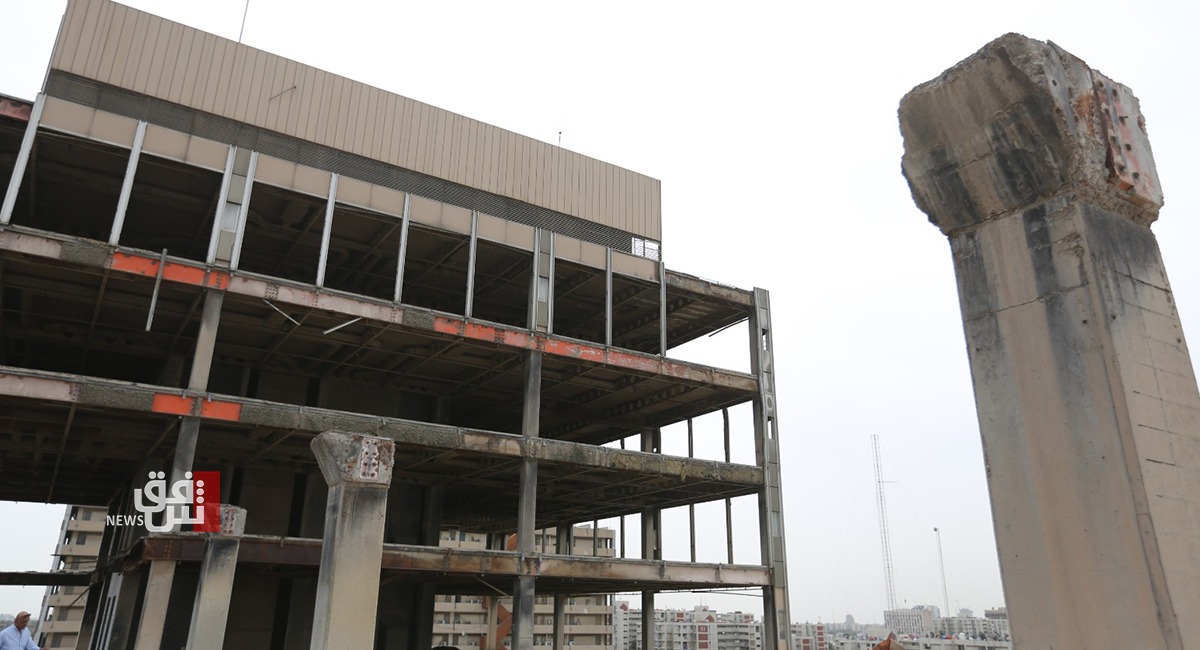 Shafaq News / nearly eighteen years ago, Al-Rasheed Theater was vibrant with life as one of Iraq's most important cultural landmarks. But the American bombing that targeted it during the invasion of Iraq in 2003 and the subsequent theft of the theater's commodities rendered it an abandoned place, left to wither by rain, storms, and dust.

The theatre was built in 1981 by French and Swiss companies. The latter was responsible for the construction, while the french one for the equipment. It is located opposite the Mansour Melia International Hotel and adjacent to the Green Zone. With a 500-600 seats capacity, it was visited by German, French, and Arab artists at the time.

"In 2003, the theater was bombarded, which led to major cracks in its walls and roof, and was looted and burned down several times later", said Wateed Abdul Hadi, head of the engineering department at the Cinema and Theater Directorate.

Abdul Hadi pointed out, "These actions have further damaged the theater, especially since it has been neglected for a long time", adding, "There is no governmental interest to restore the theatre, but it is the Cinema and Theatre Directorate that has adopted this issue as for more than 12 years there has been no attempt to reconstruct it."

"Because the theatre is a great cultural monument, we have taken it upon ourselves to rebuild it as a place for artistic and cultural activities and festivals", he continued.

Furthermore, the director of artistic techniques and production at the Directorate, Kamil Tatar, told Shafaq News agency, "Al-Rasheed Theatre witnessed the presence of all Iraqi, Arab, and foreign artists, as well as many festivals such as the Babylon Festival, which was attended by Arab and foreign artists from France, Denmark, and Germany."

He explained, "We were able to get the theater's techniques into a better state. I approached some companies, but they asked for a lot of money, so the government did not adopt the topic."

"The Cinema and Theatre Directorate adopted the topic – headed by the director-general Ahmed Hassan Moussa. The theater's reconstruction was launched on May 21st, 2020, and is carried out by our cadres' efforts and support by some banks and civil institutions, amid the total absence of any governmental participation", Tatar concluded.

Russia’s State Duma: Iraq’s conference is a “success for the Iraqi diplomacy”

Al- Nujaba: US to face deadly attacks in Iraq