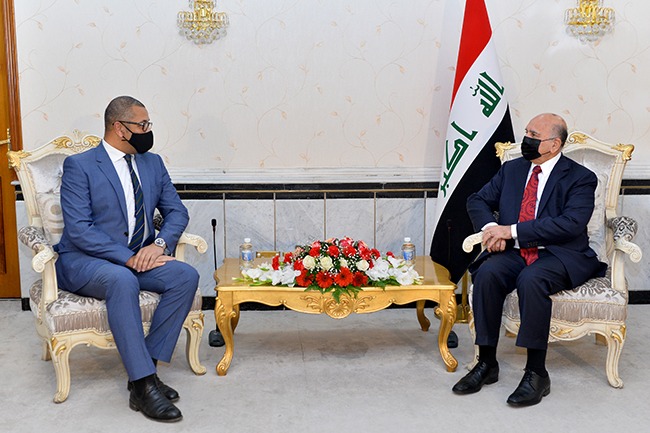 Shafaq News / Iraqi Minister of foreign affairs, Fouad Hussein, discussed on Monday with the British Minister of State for the Middle East and North Africa Affairs the file of the upcoming elections.

A statement by the Ministry said that Hussein referred to the topics discussed during the recent visit of Prime Minister Mustafa Al-Kadhimi to the United Kingdom, the importance of moving forward with work on establishing the Partnership and Cooperation Agreement between Iraq and the UK, and holding meetings on the subject next January.

Hussein pointed to, "tangible progress in defeating ISIS”, stressing "the importance of continuing security cooperation between the two countries, continuing to train Iraqi forces and exchanging intelligence information to prevent the return of terrorist groups' activity."

He continued, "We also discussed developments in the political situation in Iraq, and the government's decision to hold early elections next June," noting that, "the government seeks to hold free and fair elections. Iraq has sent a message to the United Nations to provide support and observers to hold the elections on time.”

The two ministers also discussed several regional and international issues of common concern, stressing the need to reduce tension and achieve calm in the region, and to avoid an escalation that will not serve any party.

For his part, Cleverley praised Iraq's balanced stance on current events in the region and affirmed the United Kingdom's political and economic support for Iraq, and its desire to develop relations with Iraq at all levels.

He praised the efforts of the Iraqi government in the field of combating ISIS terrorist organization, affirming Britain's support for Iraq in its war against terrorism.