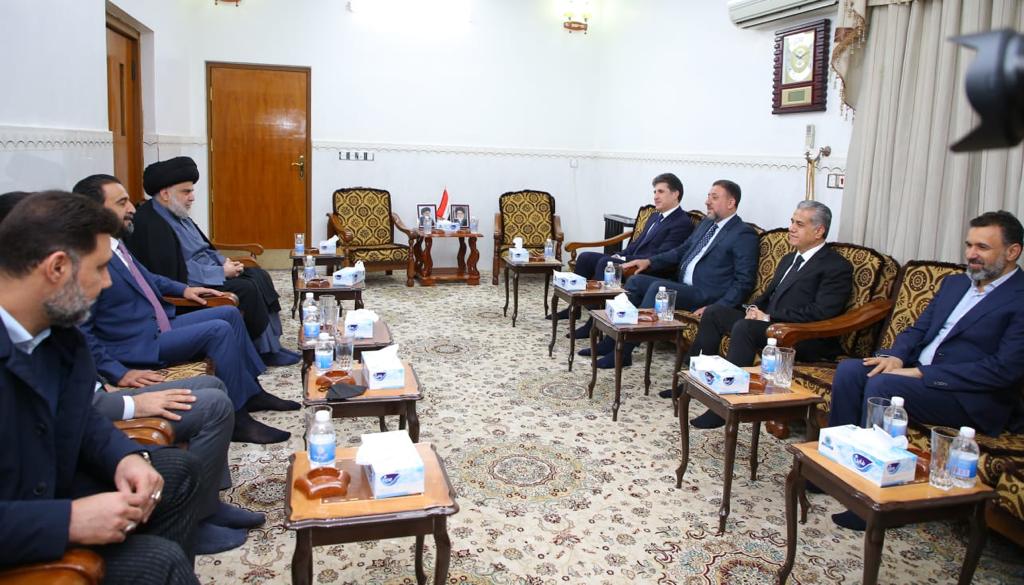 Shafaq News / The Kurdish leader Masoud Barzani hoped today that the meeting between President Nechirvan Barzani, Iraqi Parliament Speaker Mohammad al-Halboosi, and the head of the Sadrist movement, Muqtada al-Sadr, would be fruitful.

The Kurdish leader said in a tweet today, "I genuinely hope that the meeting between Sayed Muqtada al-Sadr, the President of the Kurdistan Region, Nechirvan Barzani, and Parliament Speaker Mohammad al-Halboosi, will have positive results, and will pave the way for addressing the problems facing the political process in Iraq."

Al-Halboosi said in a tweet today, "The time of foreign interferences with forming Iraqi governments is over."

"Today, Iraq's mountains and deserts move towards Najaf al-Ashraf to discuss forming a national government, neither eastern nor western."

Earlier today, the President of the Kurdistan Region, Nechirvan Barzani, and the Iraqi Parliament Speaker, Mohammad al-Halboosi, have arrived in Najaf to meet the leader of the Sadrist movement, Muqtada al-Sadr.

The visit was proposed by Kurdish leader Masoud Barzani.

In a statement, Leader Barzani said that in order to address the problems and prepare a suitable political environment, he launched this initiative so that political parties can discuss and remove the obstacles hindering the political process in Iraq.

The Kurdish leader hoped that this step would contribute to solving the crisis the country is going through.