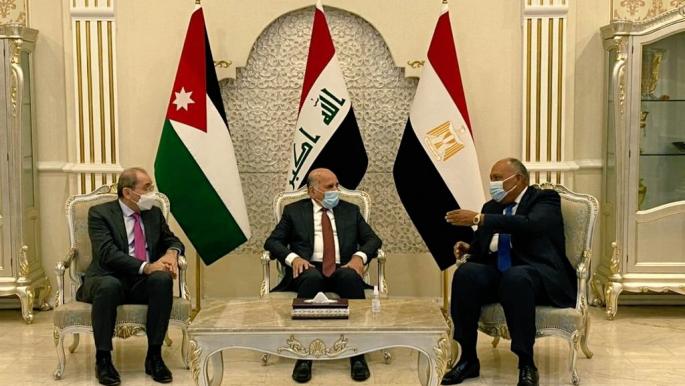 Shafaq News / The foreign ministers of Jordan and Egypt were assured of the safety of the Iraqi Prime Minister, Mustafa Al-Kadhimi, after the failed assassination attempt he was subjected to a week ago.

This came during a meeting between the Iraqi Foreign Minister, Fouad Hussein, with his Jordanian counterparts, Ayman Safadi, and the Egyptian Sameh Shukri, on the sidelines of the Sir Bani Yas in Dubai forum, according to a statement.

According to the statement, the meeting discussed ways to enhance consultation and coordination within the framework of the trilateral cooperation mechanism, as well as an update on the executive position of the joint projects between the three countries.

The Egyptian and Jordanian ministers were reassured of the safety of PM Al-Kadhimi, following the assassination attempt he was subjected to, and renewed their support for the stability and security of Iraq.