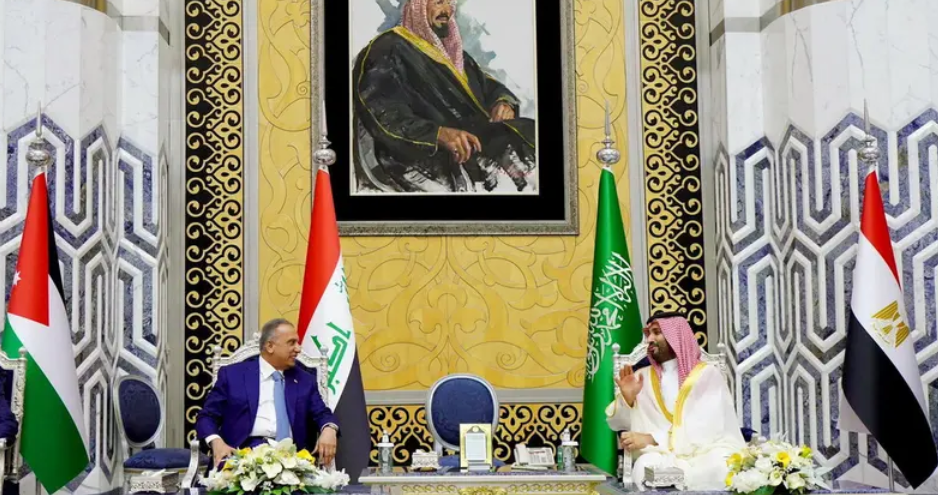 In an interview with Al-Arabiya Channel, the Prime Minister said, "the relation with Saudi Arabia is at its best and is evolving rapidly," stressing that "there are many common issues between Iraq and Saudi Arabia, and the agreement to link the electricity networks of Saudi Arabia and the Gulf Cooperation Council countries to the Iraqi grid is an important development."

Al-Kadhimi considered his attendance at the Jeddah summit to "emphasize the essential role of Iraq in the region."

Al-Kadhimi confirmed the Iraqi stance regarding supporting the Palestinian cause, "Iraq will not be a part of any axis…Iraq's relations with the Arabs and neighboring countries are at their best."

On the relations between Tehran and Washington, the PM said that the US-Iranian talks would reflect positively on the region."

"We look for close ties with Washington."

During the meeting, the Crown Prince and the Prime Minister discussed bilateral relations and cooperation opportunities between the two countries and exchanged views on regional issues.

The meeting comes ahead of the two-day Gulf Co-operation Council summit, which will begin Saturday and will bring together GCC leaders, including Jordan's King Abdullah, Egypt's President Abdel Fattah al-Sisi, Bahrain's Crown Prince Sheikh Salman bin Hamad, Iraq's premier, and US President Joe Biden, who is currently on an official visit to the Kingdom.

The summit will address energy, inflation, food security, and environmental challenges as leaders discuss new ways of partnership and joint coordination to overcome these and other issues.