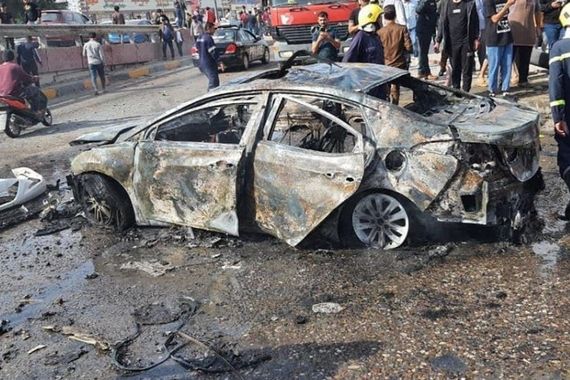 Shafaq News/ The Commander-in-Chief of the Armed Forces, Prime Minister Mustafa Al-Kadhimi, pledged to eradicate terrorist cells from all of Iraq.

Commenting on the Basra attack, Al-Kadhimi said on Twitter, " We ordered a detailed investigation to find the perpetrators behind the cowardly terrorist attack in Basrah.

Our ISF heroes are combating the attempts of terrorists, and will defeat them throughout Iraq. Our people's security will not be undermined.

He added, " Our heroic Air Force conducted a strike against Daesh hideouts in Anbar. We will continue to pursue these terrorists until we uproot them from Iraq.

Those who attempt to terrorize the state through the use of arms will not stand a chance against our people and state institutions."

A security source accused Basra's "death squads" of orchestrating and executing the bomb attack in Basra that killed four people and wounded four others.

"Death squads" were behind so many of the killings, abductions, and torture of protesters, activists, and journalists during the demonstrations that took over the Country in 2019.

The source said that the bomb used in today's attack was a five kilograms funnel-shaped explosive rigged to a motorcycle parked on the roadside.

"The blast was sought to target a chief inspector investigating the case of the death squads in Basra," the source said, "the inspector survived the attack, but four victims perished, and others were wounded."

The explosion took place at al-Somood Bridge near the Chancellery building of the Basra Teaching Hospital.