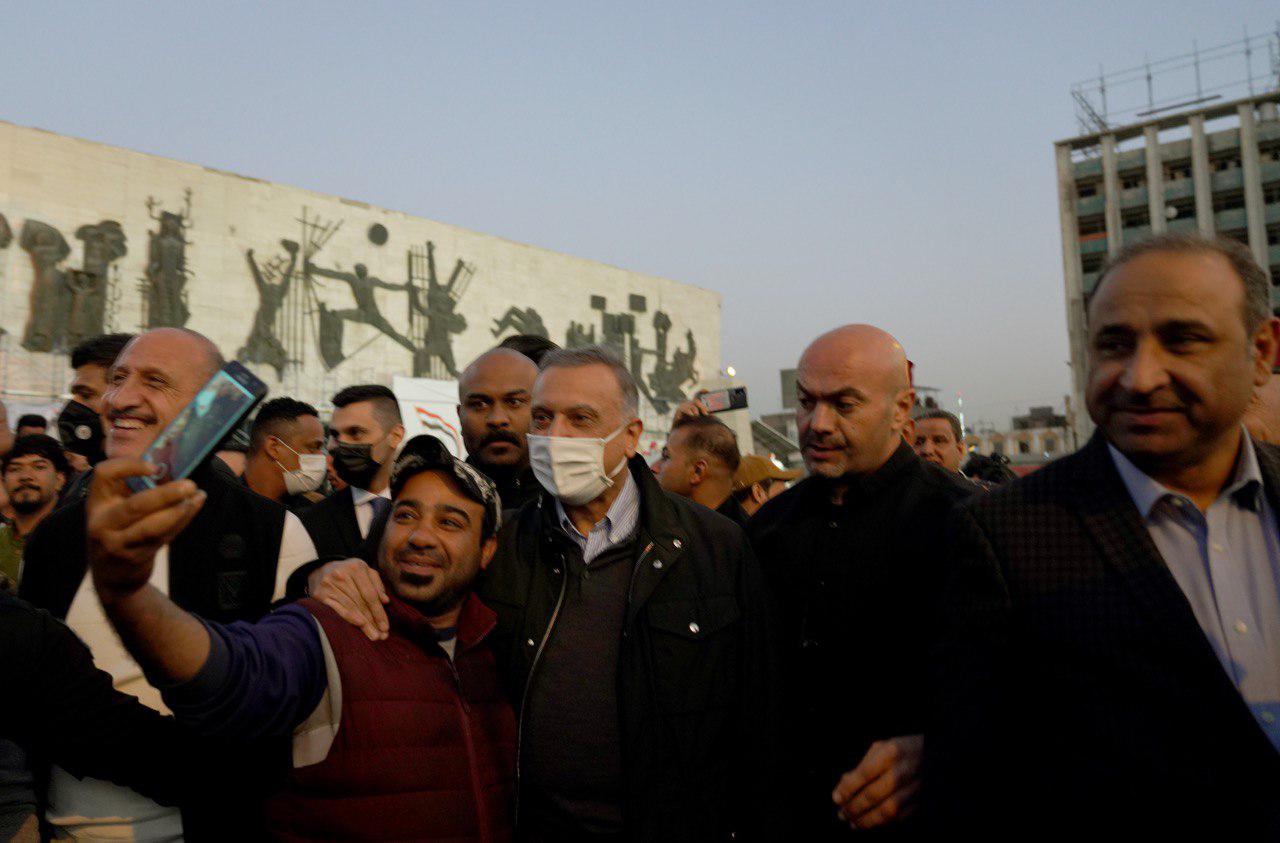 Shafaq News/ (Al-Monitor) Reports that Iraq has issued an arrest warrant for a member of a powerful armed group and arrested another have led to tentative hopes for the future of holding “outlaws” to account in the country, despite claims that some leaked documents were false.

A planned protest on the first anniversary of the Jan. 3 assassination of Iranian Maj. Gen. Qasem Soleimani by US drone strike and the Iran-linked Iraqi commander Abu Mahdi al-Muhandis just outside the Baghdad airport failed to attract as many participants as had been expected. Concerns over threats about a major attack on US forces or interests as revenge for the assassination also did not materialize.

One of Prime Minister Mustafa al-Kadhimi pledges when sworn in on May 6 following months of a government void and massive protests across southern and central Iraq was to bring all arms under state control. The extent toward which progress has been made on this front almost eight months later has been the subject of heated debate but has taken on greater urgency as the drawdown of US troops continues.

Fewer foreign troops in the country is seen by some as a risk to Iraqi security, while others feel it is a positive step toward less “interference” in the country.

Following an attack on Baghdad’s heavily fortified Green Zone on Dec. 20 in which at least eight rockets were fired according to Iraqi military sources and 21 according to a US Central Command statement, a member of the well-known armed group Asa’ib Ahl al-Haq (AAH) was also arrested.

He was arrested on criminal charges linked to the Dec. 20 attack on the US Embassy in the Green Zone.

Despite being an Iran-linked faction, AAH has at times engaged in significant outreach to local communities in Sunni-majority areas. In the central Saladin Governorate, for example, this journalist has in previous years met with members of the largest Sunni-majority tribe who joined the local branch for the sake of a salary.

On Dec. 26, a man often referred to as a “security official” for the Iran-linked armed group Kata’ib Hezbollah and who goes by the name “Abu Ali al-Askari” on social media threatened the prime minister that if he continued to test the patience of the “resistance factions,” he would have his ears “cut like a goat.” Iran-linked armed groups operating independently of the Iraqi state often use the term “resistance factions” when referring to themselves.

A warrant was reportedly issued for the Kata’ib Hezbollah security official’s arrest in late December shortly after Askari’s tweet appeared and the alleged official document was leaked to the media. Some later reported that the document was fake.

Requests for comment sent to both an Iraqi Interior Ministry official and a Kata’ib Hezbollah spokesman had not been answered by the time of publication.

Twitter had blocked Askari's account earlier in March after he threatened various Iraqi officials including Kadhimi, in his role as head of the country’s intelligence service. Askari had accused the current prime minister of involvement in the Jan. 3 assassination last year.

Some Iraqi armed factions linked to Iran also criticized the tweet and Askari’s threats. As prime minister, Kadhimi is commander-in-chief of the armed forces; several of these groups have brigades that are part of the official Popular Mobilization Units (PMU), which receive government salaries and pensions.

Askari claimed in a tweet that “not even Iranian intelligence” services would be able to protect Kadhimi, with some observers noting that in so doing he drew a distinction between Iran’s Intelligence Services Ministry and the parallel service run by the country’s Islamic Revolutionary Guard Corps.

Social media, meanwhile, was awash in the final days of December in cryptic, angry vows of revenge by supporters of armed groups close to those killed in the US attack last Jan. 3 and in speculation about what the Iran-linked factions were planning.

Kadhimi has made a point of heading to the streets in times of tension since taking office in May to shore up the public’s confidence in his government and security services. He paid a visit to Tarmiya — long known as the “center of Salafi recruiting” near the capital — after a sniper killed a high-ranking military official in July. He was recently shown in videos walking confidently through the streets of Baghdad after the attack on the Green Zone in December.

However, many decry his government’s apparent lack of progress in finding and prosecuting the killers of such high-profile targets as renowned Iraqi counterterrorism expert Hisham al-Hashimi, who was assassinated in Baghdad on July 6. Many claim Hashimi was likely to have been killed by armed factions linked to Iran.

Kata’ib Hezbollah spokesman Mohamed Mohi had on Nov. 20 stressed to this journalist that Kata’ib Hezbollah is “a jihadi faction that adopts Islamic law and works to spread it and defend it.” In relation to rocket attacks that month, he had said that given “the circumstances Iraq is in and the US post-election transition,” it is “illogical to carry out military actions against US targets.”

The spokesman for the US-designated terrorist group, which nonetheless has brigades within the official Iraqi PMU forces, went on to say that “it is necessary to look for who is benefiting from these attacks since there are US, regional and Iraqi parties that do not want the American forces to withdraw from Iraq and there are some that are working to push the defeated Trump administration to carry out an attack targeting the resistance factions and the PMU.”

Meanwhile, some less publicized signs of an improvement in law enforcement and state control have been seen. For example, Iraq’s customs revenue reportedly rose by approximately 41% between June and November 2020 compared with the previous year.

This, as some commentators have pointed out, is likely in large part due to reducing militia control of customs points through bulking up military oversight of them.

An explosive device kills an official in Al-Hashd