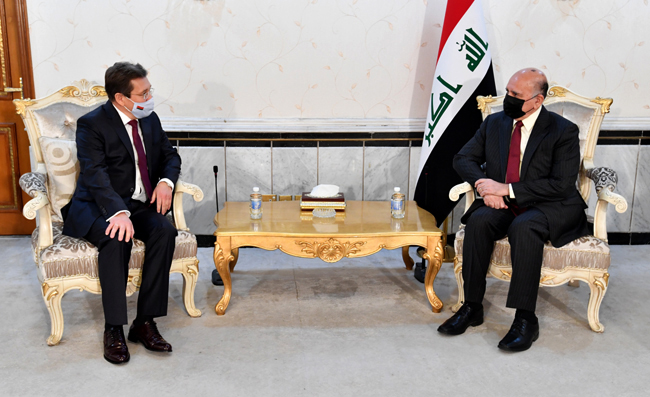 During the meeting, Hussein received the credentials of the new non-resident ambassador to his country, according to a statement of the Ministry.

The minister said, "Iraq has money owed by Belarus and this file must be activated because Iraq is going through exceptional economic conditions. The statement, however, did not mention any details regarding this debt.

The Iraqi minister demanded the Belarusian side " to cooperate in solving the problems and obstacles facing the Iraqi students in Minsk," stressing, "the necessity of activating the joint Iraqi-Belarusian committee in Baghdad."

For his part, the Belarusian ambassador expressed, "his country's readiness to support and cooperate with Baghdad in the fields of health products, medical care, oil and sports."

It seems that the file of Iraqi funds in Minsk has been stuck for a long time, as the former Iraqi Minister of Foreign Affairs, Ibrahim al-Jaafari, demanded Belarus to repay them to Iraq.

The Iraqi minister at the time used Hussein's same formula to request the funds, as he asserted that his country was "going through exceptional economic conditions."

Iraq is currently suffering from a stifling financial crisis due to the drop in oil prices on which Iraq relies by 97% to finance its expenses.

Belarus airline to bar Syrians, Iraqis and Yemenis from boarding in Turkey at Ankara's request