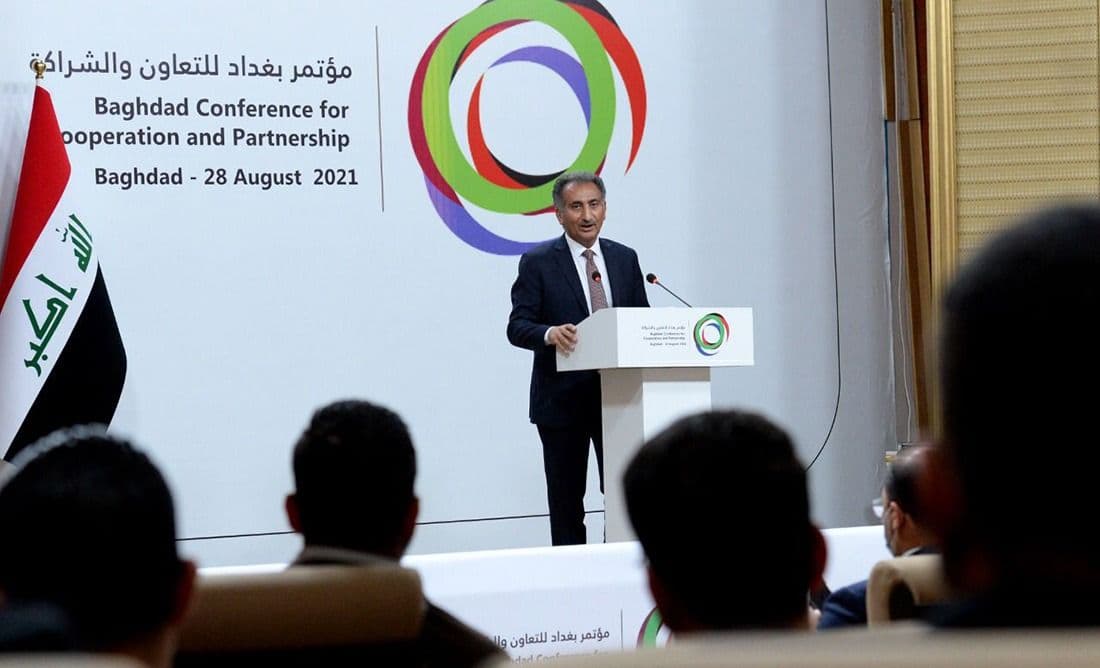 Shafaq News/ invitation to Shi'ite Islam Iran to join its upcoming Baghdad summit that the country hopes will include Saudi Arabia and its Sunni Islam Gulf allies. This move could represent a major shift in a relationship that has come close to open conflict over the past few years.

By inviting both Iran and Saudi Arabia, Iraqi Prime Minister Mustafa al-Kadhimi could turn the page on a conflict that has been inflamed by the ongoing war in Yemen, where the two powers support dueling factions, which ultimately led them to sever ties in 2016.

Tensions reached new heights in 2019, when Saudi Arabia accused Iran of a 2019 assault on Saudi oil plants that briefly knocked out half of the country's oil production.

Reuters reported that along with the effort to ease tensions, the summit will focus on Afghanistan, the war in Yemen, Lebanon's collapse and a regional water crisis. Along with the aforementioned powers, the event will include the majority-Muslim countries of Egypt, Jordan, and Turkey, with France also set to play a role in the easing of tensions.

"Even if we bring the foreign ministers together at one table this could be considered a breakthrough to end the tensions between Iranians and the Gulf Arabs," an official close to Kadhimi told Reuters.

Witnessing the tumultuous American pullout from Afghanistan, Reuters reports that the Saudis have become concerned over the amount of support they can expect from Washington going forward, especially as the Biden administration seeks a way back into the Iran nuclear deal, which raises security concerns among Arab Gulf states.

The International Crisis Group writes that perceptions of an unreliable Washington have pushed Gulf states to consider a new path of diplomacy centered around de-escalation with Iran. Such efforts could play a vital role in maintaining stability within the region, as the power vacuum left in Afghanistan could lead to the proliferation of terror.

"The countries that are participating in this summit all perceive international terrorism as a threat to their national security interests," Ali Nazary, head of foreign relations with the National Resistance Front of Afghanistan, told Newsweek. "I believe that unity amongst these countries, who are critical of the support that terrorism is receiving, and especially that the Taliban are receiving in Afghanistan, is crucial for the Resistance to continue."

The National Resistance Front of Afghanistan represents a body of Afghan individuals based in the Panjshir Valley who are allied against the Taliban's rule. Protected by the Hindu Kush mountain range, the area is one of the last places in the country free of Taliban rule.

Acting Afghan President Amrullah Saleh holds ties to the group, which is led by Ahmad Massoud, whose father led previous military efforts against the Taliban and Soviet Union. Together, Saleh and Massoud are seeking a power-sharing agreement with the Taliban.

Nazary said any agreement between the countries invited to the Baghdad summit that focuses on the curbing of terrorism would be beneficial to the Resistance. While Iran has provided some aid to the Taliban in the past, the country has said the two groups do not share an "affinity" for one another.

Were the Taliban to harbor ISIS militants, Iran could face threats to its Shi'ite population, given the hardline Sunni-rooted terrorist group's history of attacks against Shi'ite Muslims. Similarly, despite Saudi Arabia's Sunni roots, ISIS has called for the overthrow of its government for "trying to secularize its inhabitants."

"The whole notion of these countries being against terrorism is beneficial to us because they will need a resistance in Afghanistan to challenge any radical extremist regime," Nazary told Newsweek.

He said that there is an active terrorist threat in Afghanistan at the present time.

On top of the uncertainty brought on by the Afghanistan conflict, Anthony H. Cordesman, an expert on middle east affairs and the Arleigh A. Burke Chair in Strategy at the Center for Strategic and International Studies, said these countries face added pressures brought on by COVID-19 and uncertainties around the future of the oil market.

Taking these unknowns into account, Cordesman said Gulf states face added tension over whether Iraq will emerge as an individual power or a piece of Iran's zone of influence. These concerns became heightened after meetings on Iraq's partnership with the United States produced unclear results. With Iraq standing as a barrier between Iran and the Arab Gulf, its future remains a top concern regarding the future balance of geopolitical power in the region.

"Iraq certainly has suffered from the conflicting pressures of Iran, the other Arab states, and the United States," Cordesman told Newsweek. "In many ways, of course, it's a logical mediator, simply by geography alone and by the fact that both Saudi Arabia and Iran have shown signs that they would like to at least moderate the tensions between them."

As Iraq heads into election season, al-Kadhimi seeks avenues to limit Iranian influence and to curb the power of state militias. A successful summit that produces clearer positions on issues facing the region could elevate Iraq's status. An unsuccessful summit could further complicate Iraq's position balancing alliances with its neighbors to the west and east.

However, Iraq could be in luck. Cordesman said Iran's new government under the recently elected President Ebrahim Raisi could value this meeting as a means toward reducing tensions with its neighbors and peeling back some of the existing sanctions it finds itself under.

Exactly what this summit may bring about remains an unknown. Cordesman stressed that declarations of good intent mean little when not backed up by action, especially when it comes to the Gulf.

"You do have very real tensions in the Gulf that affect the shipping missiles and the potential future of nuclear weapons in the region," Cordesman told Newsweek. "Reassuring words, if they are issued and have some content, may be a good start towards something, but it's going to be very very difficult, unless this summit produces a much clearer position than it seems likely right now, to say that it's going to change much."