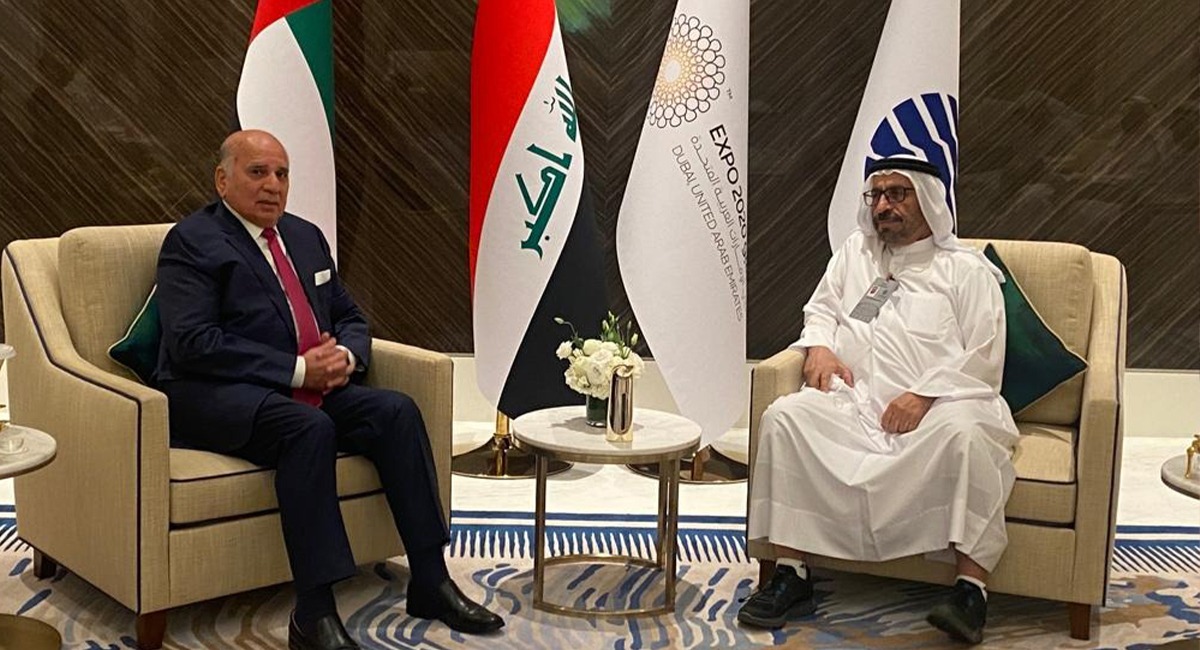 Shafaq News/ The Iraqi Minister of Foreign Affairs (MoFA), Fuad Hussein, convened with the Emirati Minister of State, Khaleefa Shaheen al-Marar, in the Pavillion of the latter's country at Expo 2020 Dubai.

The meeting, according to a readout issued by the Iraqi Ministry, discussed the "bilateral ties between the two countries and the ways to develop it in a manner that serves the aspirations of their people."

Hussein commended the tremendous advancement the UAE has achieved at multiple levels, stressing the need to "coordinate the positions of both states toward regional and international issues."

The Minister laid emphasis upon bolstering the commercial cooperation between the two countries, expressing Iraq's readiness to hold the 10th meeting of the Iraqi-Emirati committee as soon as possible to conclude treaties and memoranda of understanding.

Hussein welcomed the Emirati initiatives and projects in the reconstruction and investment sector in Iraq and highlighted the facilities the Iraqi government provided to investors and businesspersons.

For his part, the Emirati Minister iterated his country's commitment to reinvigorate the bilateral cooperation aspects between the two fraternal countries, praising Iraq's role in the Middle East.

Al-Marar said that the leadership of his country had issued clear instructions to expand the spectrum of cooperation with Baghdad to boost the mutual interests of the people of the UAE and Iraq.

Fuad Hussein from Rome: Iraq's sovereignty is a red line

Iraq’s Minister of Foreign Affairs: we appreciate the US efforts in training our security forces

Iraq to activate the work of the joint committee with Pakistan