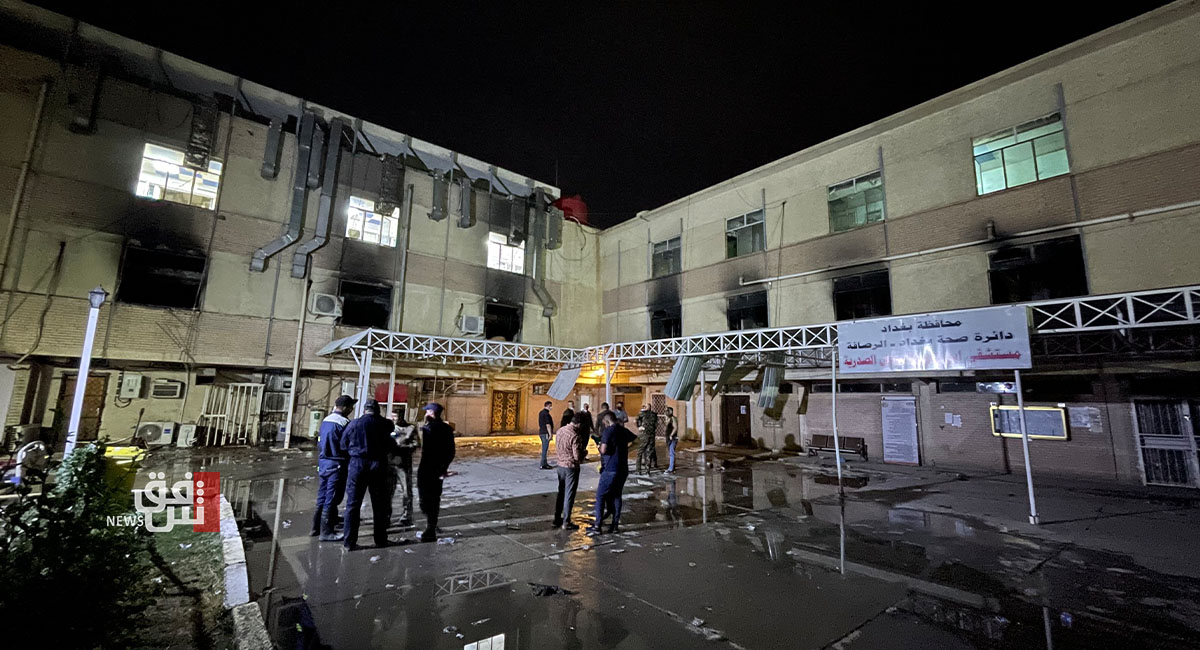 Shafaq News/ At least 27 people were killed and 46 injured in a fire on Saturday at a hospital in southeastern Baghdad that had been equipped to house COVID-19 patients, medical sources at three nearby hospitals said.

The fire at the Ibn Khatib hospital in the Diyala Bridge area of the Iraqi capital occurred after an accident caused an oxygen tank to explode, the sources said.

Many ambulances were rushing towards the hospital, ferrying away those hurt by the fire.

Patients not injured in the incident were also being transferred out of the hospital, the medical sources said.

The head of Iraqi civil defense unit said the fire broke out on the floor designated for the pulmonary intensive care unit and that 90 people have been rescued from the hospital out of 120, state news agency INA quoted him as saying.

Major General Kadhim Bohan added that the fire had been put out.

Iraq's healthcare system, already ruined by decades of sanctions, war, and neglect, has been stretched during the coronavirus crisis.

Iraq's Prime Minister, Mustafa al-Kadhimi, announced a three-day mourning in the country and instructed an immediate investigation into the causes of what he called a "tragic accident".

Al-Kadhimi held a meeting at dawn with a group of Ministers, security leaders, and other officials in the headquarters of Baghdad operations command to discuss the aftermath of the incident.

The prime minister described the incident as a "setback" and a "breach to National Security", blaming negligence. Authorities will investigate the hospital director, the heads of security and maintenance, and other officials, al-Kadhimi said.

The prime minister's official Twitter account said he ordered safety inspections to be conducted on all medical facilities within a week.

The Iraqi Ministry of Health and Environment dismissed today, Sunday, the head al-Rusafa/Baghdad Health Directorate, the director of Ibn Khatib hospital, the technical and administrative Deputy-Director, the head of Engineering and Maintainance department, noting that the decision is issued by PM al-Kadhimi himself.

The President of the Republic, Barham Salih, extended condolences to the victims' families, calling for holding the negligent liable.

Salih added, "We support the decisions issued by the Government and the Parliament about the need to open an immediate investigation into the causes of the incident, take the appropriate action, and hold the negligent accountable."

Al-Halboosi instructed the Health Committee in the Iraqi Parliament to hold an immediate meeting to exert its oversight role with the parties related to the matter.

The Parliament Speaker invited the body of lawmakers to convene on Sunday at 11:00 am to discuss the sorrowful incident.

Baghdad Governor, Mohammed Jaber, echoed the prime minister's call for an urgent investigation to determine if anyone should be "brought to justice" for negligence.

In a statement, the Iraqi High Commission for Human Rights said the incident was "a crime against patients exhausted by COVID-19 who put their lives in the hands of the health ministry and its institutions and instead of being treated, perished in flames."