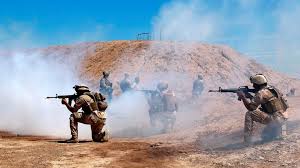 Shafaq News / A security source reported, on Wednesday evening, that ISIS had killed an Iraqi soldier in Kirkuk Governorate.