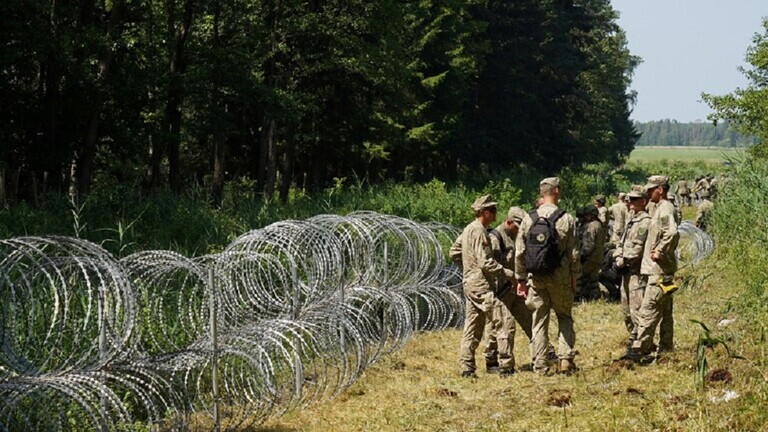 Shafaq News/ the Belarusian State Border Committee claimed that five Iraqi migrants who were forcibly expelled to Belarus from Lithuania had injuries, including dog bites, and had been hospitalized.

"In the area of the Lida border guard detachment a patrol inspecting the borderline picked a group of five Iraqi citizens. They had been forcibly expelled by the neighboring country to Belarus," the report says.

According to the border guards, "the foreigners bore traces of violence resulting from the use of firearms and police dog bites."

The injured were given first aid and taken to medical establishments. The Border Guard Committee has released a video showing the affected migrants.

Earlier today, Belarusian President Alexander Lukashenko ordered an investigation into the death of an Iraqi man who was allegedly found near Belarus's border with Lithuania as tensions flare between the two countries.

The announcement of the probe came as border guards in EU member Lithuania said Tuesday they had begun to push back migrants trying to enter illegally from Belarus.

Belarusian border guards said Wednesday they found a man in "serious" condition in Benyakoni, near the border with Lithuania.

The unidentified man "died in the arms of the border guards," said the semi-official Telegram channel of the Belarusian presidency.

"The president was immediately informed of this shocking murder of an Iraqi returning from Lithuania," the channel said.

Lukashenko ordered a probe into the incident and said that the relatives of the deceased are to be located and issued Belarusian visas so they can retrieve the body, it added.

The European Union has accused Belarus of weaponizing migrants, a claim the ex-Soviet country denies.

"To use migrants as a weapon, pushing people against the borders, is unacceptable," Europe's foreign policy chief Josep Borrell said in late July.

The 27-nation bloc was also pressing Iraq to help stem the flow of migrants to Belarus.

On Tuesday, the spokesman of the Belarusian foreign ministry, Anatoly Glaz, rejected those "unfounded accusations."

Belarusian border guards said Tuesday that some 40 migrants with "bodily injuries", including women and children, had been turned back by Lithuania and accused the EU state of using "force."

So far this year, Lithuanian border guards have detained more than 4,000 migrants — mostly Iraqis — compared with 81 for all of 2020.

Tensions between Minsk and Vilnius have escalated after Lithuania sheltered several members of the Belarusian opposition, including Lukashenko's election rival Svetlana Tikhanovskaya.

Several opposition figures have fled the country as Lukashenko cracked down on opponents following unprecedented protests that broke out after a contested presidential election last August.