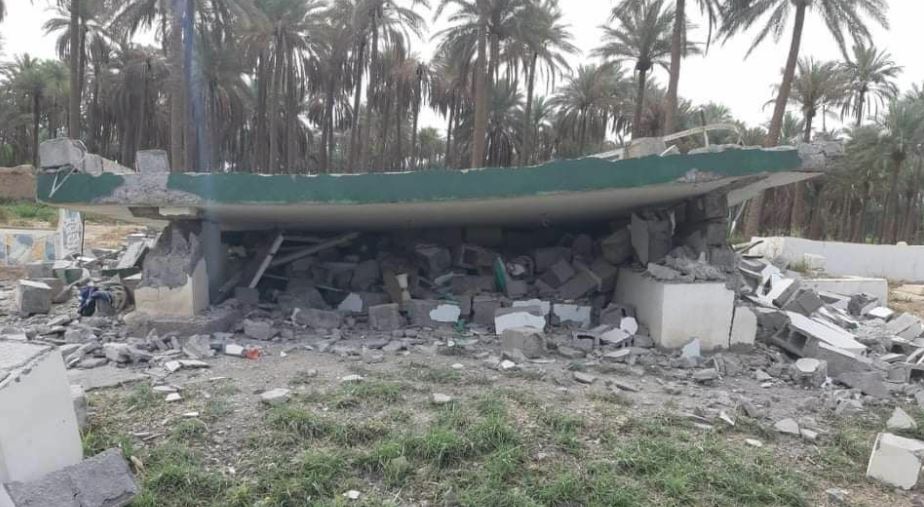 Shafaq News/ Pictures taken on Monday depicted a religious site for Sunni Muslims in Diyala reduced into rubbles following an attack waged by an ISIS group earlier at dawn, and the police of the governorate said that media reports on the attack are unfounded.

Pictures obtained by Shafaq News Agency depicted a pile of rubbles and debris on a concrete slab where the Shrine of Sheikh Shaaban, a revered Sunni figure, reportedly stood.

Earlier today, A group of ISIS militants reportedly attacked and detonated a religious site for the Sunni Muslims in the sub-district of al-Abbara, northeast Baqubah.

A source told Shafaq News Agency that a group of four militants clashed with the security forces in the vicinity of Sheikh Shaaban at dawn on Monday.

"The attackers rained mortar shells on the shrine during the attack. Later, they managed to infiltrate inside and detonated the building into rubbles with explosive devices," the source said.

The officer said that Diyala's Police Command reserved the right to sue the media outlets and persons spreading rumors on social media.

The followers of ISIS practice a radical form of Salafism, a branch of Sunni Islam whose adherents strive to emulate the Prophet Muhammad and his followers and who claim to practice Islam in its purest, most unadulterated form. They support Sharia law, reject religious innovation, consider venerated tombs and shrines as symbols of idolatry.

Five injured in an explosion in Diyala