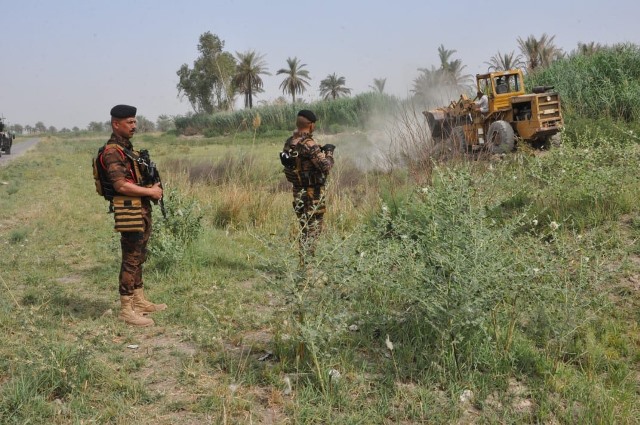 Shafaq News/ A government official in Diyala announced on Sunday the completion of the fortification and purge of the ISIS hotbed between the two districts of al-Abbara and Abi Sayda, northeast to Baqubah, deeming it as the “biggest security operation in 14 years.”

Al-Tamimi stressed, “The operation fortified 12 villages and unblocked 25 roads in the orchards and villages, as well as purged around 12,000 dunums of ISIS hideouts and divested any fortifications through engineering efforts and with the help of bulldozers.”

Al-Tamimi added, “The governor of Diyala, under field supervision, has directed service in plans parallel to the security plans, including the rehabilitation of roads and corridors, providing basic services to villages and mobilizing all service departments imperative to restore life and put an end to the service shortcomings which had plagued the previous period.”

Al-Tamimi considered that the operations, which targeted an area named “The Fire Line” for the frequency of security incidents in it, the beginning of a new chapter of stability and security after years of security strife, and called on the local citizens to cooperate with intelligence and information agencies to prevent ISIS from any attempts to revive its cells and threaten societal security and stir up strife and sectarian and tribal conflicts .

This plan is a repetition of the Abi Saida sub-district scenario, which has yielded positive results in reducing terrorist incidents and long-lasting clan conflicts.