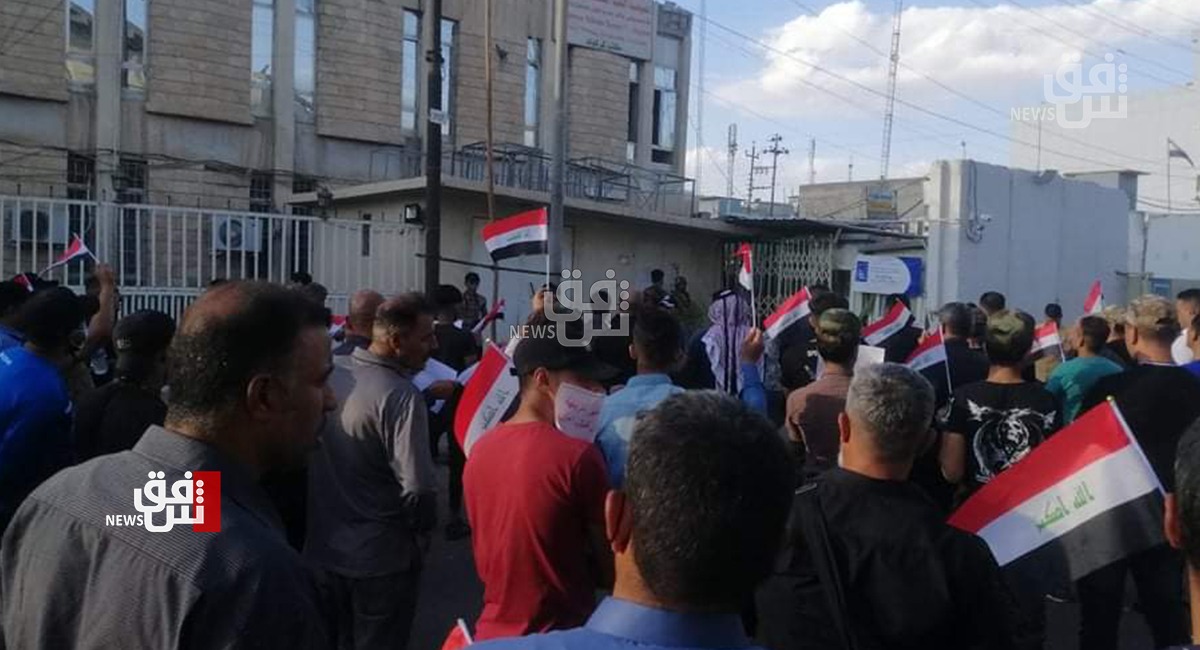 Shafaq News/ Dozens demonstrated in Kirkuk for the second day in a row against the results of the parliamentary elections.

Shafaq News Agency correspondent said that demonstrators gathered in front of the office of the Independent High Electoral Commission in Kirkuk, calling the federal government to cancel the results of the elections that took place on the tenth of this month.

Yesterday, Monday, dozens of Kirkuk residents organized another protest against the results blocking the main road.

In Basra, dozens of protesters prepared to set up tents in front of the IHEC office.

Earlier, Demonstrators protesting the results of the Iraqi parliamentary election have set up sit-in tents near the heavily fortified Green Zone, downtown the Iraqi capital, Baghdad.

Leading Shia parties in Iraq have announced their collective rejection of the October 10 parliamentary elections results after the initial evidence suggests a collapse in their vote share.

In particular, the Al-Fatah alliance, composed of supporters of the country's al-Hashd al-Shaabi (Popular Mobilization Forces-PMF), denounced the results as "fabricated." At the same time, a one-armed faction appeared to threaten violent action in response.

In a statement last week, Hadi al-Ameri, leader of al-Fatah, called for joint response against the election results from other Shia political factions.

Al-Fatah saw its share of the seats in parliament, where it had previously been the second-largest party, decline sharply from 48 to 14 seats.

Al-Fatah Alliance, led by paramilitary leader Hadi al-Ameri, is comprised of parties and affiliated with the Popular Mobilization Forces, an umbrella group of primarily pro-Iran Shiite factions. The alliance rose to prominence during the war against the Sunni extremist ISIS group. However, it includes some of the most hard-line Iran-backed factions, such as the Asaib Ahl al-Haq militia.

Separately, a spokesperson for Kataib Hezbollah, an armed Iran-backed group labeled a terrorist organization by the U.S., called for their supporters to oppose the results and warned they would "stand firm and insist on restoring things to their rightful place."

"The brothers in the Iraqi resistance should prepare for a sensitive stage that requires wisdom and close observation from us," said spokesperson Abu Ali Al-Askar, using a term that refers to groups opposed to U.S. and Israeli influence in the region.

Several other Shia political parties also faced a steep decline in their vote share, leading to complaints of irregularities.

The political bloc led by former Prime Minister Haider al-Abadi and cleric Ammar al-Hakim also co-signed a statement with many Shia political parties rejecting the election results and warning that they would "take all available measures to prevent the manipulation of votes."

Late on Monday evening, a meeting was held at the home of former prime minister and leader of the State of Law bloc Nouri al-Maliki, which was attended by most of the leaders of the Shia political forces and the leaders of the Iran-backed armed factions, where they discussed how to respond to what they deemed a "coup" by al-Sadr, backed by a "British-American plot."

Reports emerged about an intention to "escalate" the situation so that al-Sadr and Prime Minister Mustafa al-Kadhimi understand that "what happened will not pass without consequences."

"Kataib Hezbollah insists on resorting to military options, but others have reservations about this option, and the majority of them do not support it."

Posted online successively, the results of the early parliamentary election showed the Sadrist movement maintaining the most seats in parliament, leading in several of Iraq's 18 provinces, including the capital Baghdad. Al-Sadr, a controversial leader, remembered for leading an insurgency against U.S. forces after the 2003 invasion, appeared to have increased his movement's seats in the 329-member parliament from 54 in 2018 to 73.

The Kurdistan Democratic Party (KDP), led by the Kurdish leader Masoud Barzani has won 32 seats, twice more than Iran's favorite al-Fatah Alliance, which toll of seats diminished to 14 only from 48 in the 2018 elections.

In charge of logistics, seven ISIS terrorists arrested in Kirkuk